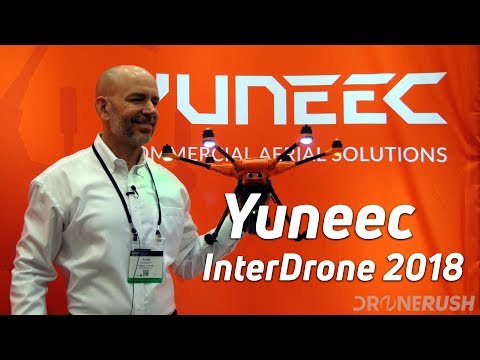 It’s a pretty common thing, a big drone company heads to a drone convention and has a new drone to share with the world. Yuneec may have officially launched the Mantis Q a few weeks prior to InterDrone 2018, but they certainly came out swinging to show it off.

In addition, Yuneec shared two other announcements in Las Vegas, including a partnership with 3DR and a brand new thermal camera for the H520 commercial drone. The Mantis Q was announced a few weeks ago. It is a compact, folding drone with 4K camera and a few tricks up its sleeve. Two of the crowd favorite features are the Voice Control and Vision-based Tracking Smart Control features.

A user can activate the drone just by speaking to it, issuing commands such as “take off”, “take a photo” and more. As for the Vision-based Tracking, this is the drone using facial recognition to ensure that it tracks the right person when in self-piloting modes. We’re not going to say much more now. We have the Mantis Q in hand, we’ll be putting all the great features to the test when we get home from InterDrone. Or sooner, if the weather on our drive home permits.

Of course, it you’ve seen enough, check out the Yuneec Mantis Q for $499 today.

3DR and the DroneCode community One of the best things we learned about at InterDrone 2018 was this fancy Open Source community called DroneCode. Various manufacturers, parts suppliers and software companies are involved in this shared drone software, both using it to improve their tech and giving back to the community when they code something new.

Yuneec has teamed up with 3DR to build hardware to serve the security and open platform needs of the U.S. Government, mostly in the construction and engineering industries. This project will be based in the United States and will go by the name 3DR Government Services.

For those that are unaware, 3DR built a great drone in the Solo, but has since turned their efforts to software. This is not the first partnership we’ve seen from 3DR, they teamed up with DJI and others on previous projects for education, flight training and more.

We’re excited to see what a Yuneec built, 3DR powered drone looks like, but if they are strictly for the government, we may never get that chance. Yuneec is one of few drone manufacturers you’ll see these days that build their own thermal cameras. The new E10T camera is one of their best, providing a dual sensor RGB and thermal imaging. Actually, Yuneec calls it the “industry’s first thermal and residual light combination camera.”

The camera is designed solely to operate on the Yuneec H520 commercial drone platform. A solid performing hexacopter that has proven itself versatile and powerful for many commercial and government consumers. The camera comes in two versions, differentiated by their photo resolution. You’ll be able to grab the 320 x 256 pixel camera for $4,999 or the 640 x 512 pixel camera for $7,499. For you hobby pilots like me out there, I assure you that these prices are in line with the market. Quality thermal imaging from the sky is not at impulse purchase price levels quite yet. We are excited to see continual innovation from Yuneec. There are few manufacturers that can stand up to DJI in terms of drone capabilities and quality, and we believe Yuneec is one of them. Their contributions and involvement in the DroneCode Project is a nice touch as well, proving they are not jut in this for themselves.

Stay tuned for plenty more coverage of the Yuneec Mantis Q, as well as DroneCode. We plan to explore each in more detail as we go.

What do you say is the best news from Yuneec out of InterDrone 2018?