Yuneec H520 and the Nevada Highway Patrol demo at InterDrone

Yuneec H520 and the Nevada Highway Patrol demo at InterDrone 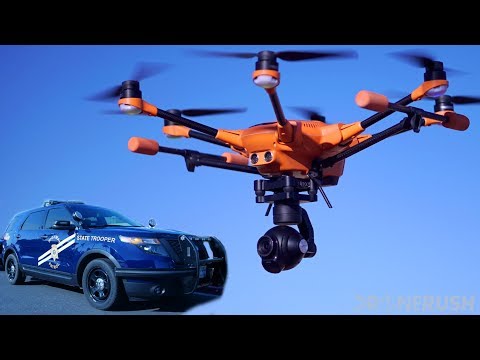 We spent a lot of time enjoying the sights and sounds of the drones of InterDrone 2017. It was a lot of indoor talk about an outdoor activity, flying. Yuneec, on the other hand, rented an entire parking lot in order to demo a flying machine doing what it does best, fly.

The Yuneec H520 has been in the hands of the Nevada Highway Patrol for a while now. They’ve been testing it as an alternative tool to accident photography for reconstruction efforts. The existing technology works well, but a drone works faster.

I know the demo reel above offers little explanation of what actually went down that day, so let me explain. In our mock situation, two vehicles were interlocked in what looks like a simple fender bender. That was just for show, of course, as a real accident on a highway is not usually as tidy. The demonstration sought to do two things: First, to show off the new Yuneec H520. Second, show how fast the system works head-to-head with existing accident reconstruction systems.

Before we go further, be sure to check out our interview with Yuneec, it is very informative. Particularly, notice how Yuneec treats the H520 as just a piece of the entire flight systems.

Back outside, a patrol unit drove on scene, deployed the H520 and took to the sky.

The ST16s ground station is the key to what happened next. Hands-free flight ensued, as the control put the drone through the air. A grid was flown over the accident, taking dozens of photos of the scene and surrounding area.

Multiple camera systems are possible, capturing heat signatures and different levels of zoom on different spots of the scene. The H520 came in for a landing, at which time the officers collected the captured data and fed it into a computer for processing. The software is Yuneec’s own, but is built on top of Pix4D mapping tools. Stitching together the images, a large, scale-able image of the entire scene was put on screen for us. A user could then look through the scene to, as they say, reconstruct the accident.

Meanwhile, the traditional hardware was still being setup to get started. Numbers are always fluid in a situation like this, but they general advertisement says that a drone flight can save as little as 45 minutes recording data for an accident like this. In the case of a large highway accident, where tire skid marks and such can span miles on the highway, flying a drone overhead can save several hours of time. These large accidents require an officer to walk the entire length, using the equipment to photograph it all. While this is happening you and I have to find an alternate route because that highway is closed. I am sure you see the value in reducing the amount of time highways are shutdown.

At this point, the Yuneec H520 in the hands of Nevada Highway Patrol was still a demo, pre-production unit owned by Yuneec. Now that the drone is shipping to consumers, Highway Patrol will get their own machine and can start the process of certification. These drone photos will be logged as evidence, obviously, once they are verified as being admissible in court, we can expect to see another drone or two in the sky.

Stay tuned for more from InterDrone 2017, only a couple pieces remain.