Large machine that does not fold for transport
One-piece propellers that need to be removed for transport
Does not use Ocusync
The newer V2.0 version is better in almost every way

When it launched, the Phantom 4 Pro looked like a superb iterative update, but this drone did not get the credit it deserves. The newer Phantom 4 Pro V2.0 is the superior drone, but the differences are subtle. This airframe has proven effective for hobby and commercial purposes, putting multiple payloads into the sky.

DJI has a rich catalog of drones, and are the makers of perhaps the most iconic drone design around, the quadcopter Phantom line. The latest of the bunch is the Phantom 4 Pro V2.0, but not long before that was the original Phantom 4 Pro and Phantom 4 Pro+. They are largely the same machine, being a reliable quadcopter with a superb camera, ready to take to the sky. When you think about drones, it's possible that the first image that comes to mind is the iconic design of the DJI Phantom line. DJI knows it, continually iterating their Phantom drones to be some of the best high-end consumer class quadcopters on the market. That trend continued in the fall of 2016, launching the Phantom 4 Pro and Phantom 4 Pro+ alongside the Inspire 2.

Full Drone Review Buy This Drone
Back to the top
Overview

DJI has officially discontinued the Phantom 4 Pro and Phantom 4 Pro+. Plenty of stock is still available at many retailers, but no new machines are in being built. The Phantom 4 Pro V2.0 is the superior machine, so we’re not too upset. The DJI Phantom 4 Pro and Phantom 4 Pro+ were announced in November 2016. As the latest in the Phantom line, these machines rocked the best of features and camera in the series, and even had some best-in-class features when compared to far more expensive machines as well.

To save myself some writing, and you from having to see DJI Phantom 4 Pro and Phantom 4 Pro+, let me explain the difference between the two.

I hope you were not expecting too much, the real difference is that the Phantom 4 Pro+ comes with a display built into the controller. That is about all. Actually, there is much to be impressed about with this, we’ll talk about it below.

Unless otherwise stated, when I say “Phantom 4 Pro” I am referring to both models of the craft. One last bit, the Phantom 4 Advanced is a different enough machine, we won’t lump it in here. For the longest time, DJI pumped out drones with a 1/2.3-inch camera sensor. In the Phantom line, the last machine to do so was the Phantom 4. Stepping things up, the Phantom 4 Pro packs a 1-inch sensor. Offering a significant upgrade over previous Phantom drones, this is one of the best cameras on flying machines under $2000. The Phantom 4 Pro is ideal for amateur, and even semi-pro drone photographers.

Considering that a base package Phantom 4 Pro is little more expensive than a Mavic Pro Fly More combo, you’ll have to consider your needs when comparing these two. Basically, if you need the more portable machine, and if camera work is less important to you, the Mavic Pro is awesome, but if you are a little more serious with your image capture, the Phantom 4 Pro is the way to go. Look out for that… Oh, never mind, the Phantom 4 Pro noticed it and came to a halt. Simple enough, this machine packs obstacle avoidance sensors on all four sides, and on the bottom. Whether you are manually piloting or enjoying one of the self-piloting modes, the only way you can really crash this thing is by flying straight up into something.

Please do not go try to crash your drone and then blame me if you are successful, you know these things are not bulletproof. As good as these types of sensors get, DJI is looking to avoid as many mishaps as they can. Forgive us, we don’t want to talk about the sensor again, we want to talk about the overall image capture. Whether shooting stills or video, the camera setup, including 3-axis gimbal, produces very stable imagery. This is in part due to the stable flight of the craft, which we almost made its own item on this list.

In short, the image output from this machine is as smooth as you can expect from a flying craft. 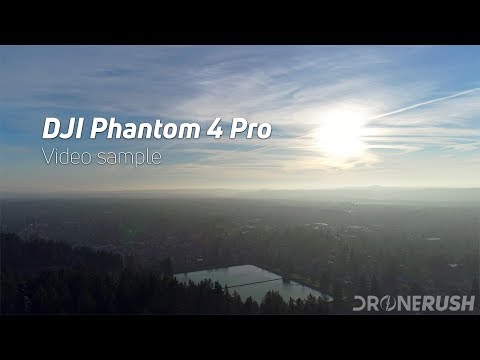 For the extra few hundred dollars, DJI packs a display into the remote of the Phantom 4 Pro+. This is not some cheap display, it is, in my opinion, worth the money. Actually, it’s more than just a 5.5-inch 1000 cd/m2 panel, you get the full DJI GO 4 app built in.

If you were needing to purchase a mobile device to connect as your drone display, the Phantom 4 Pro+ is a very cost effective purchase compared to buying a modern, well equipped smartphone or tablet.

Don’t forget that you can connect the Phantom 4 Pro remote to your DJI Goggles. The Phantom line has been around for a while. It is often imitated and really is one of the most iconic drone designs around. What I’m getting at is that this is a popular drone. Popular drones get attention, and when that attention comes from third-party accessory manufacturers… Well, just look at the iPhone, I think it’s a useless phone and OS, but the accessory market has more than a few nifty and tempting tools and toys.

Unlike my opinion that accessories made the difference between success and failure of the iPhone, the plethora of accessories for the Phantom 4 Pro take a great machine and add even more value.

Was that too harsh? I mentioned I’m an Android fan, right?

Enjoying another benefit of being popular, there is tons of support out there for the Phantom 4 Pro. I’m not just talking about DJI customer care, you’re likely to find many local drone shops with experience on this machine.

The same goes for when you need help with the software, if you are looking for ideas, tools, tips and tricks, you are bound to find them floating around. We might have a few ourselves. If you are Part 107 certified, or looking to get certified and start up a drone business, the Phantom 4 Pro is the sort of drone a customer can respect. Most people that are willing to give you $500 to fly, know that they can buy a Spark for that much money. If you show up to a professional aerial shoot with a Spark, you may not be wasting their time, but they sure might feel that way. The Mavic Pro is also a capable machine, but trust me, you’ll hear the words “where’s the good drone?” if you take it to a shoot as well.

Related reading: What to expect from a Part 107 training class This new Obsidian drone, with its new obsidian color, looks pretty slick, but may not be the best reason to choose the Phantom 4 Pro specifically. It was nice of DJI to offer a new color, though, a fresh upgrade after the first anniversary of the drone.

2 reasons to skip the Phantom 4 Pro: Let’s stop there for today. I am sure you have some ideas on why this is a great drone, and I’m sure some of our Phantom 4 Pro pilot readers will ping us in the comments below to let us know why they fly this drone.

If the Phantom 4 Pro is discontinued, why still talk about it?

In some ways you are right, drones usually get discontinued for a reason. In other ways, drones are a little like cars, just because there is a newer and better model available, and the old model is no longer in production, that does not immediately make the old model a bad model. My car is twelve years old, but it’s still a sweet ride! If you do not specifically need the advantages of the newer model, and you are sure that the older model can handle your needs, there is no harm in buying it, especially if there is a price savings in the mix.

Can I upgrade my Phantom 4 Pro with OcuSync?

Sadly, no. At least not easily. DJI uses different hardware and software in order to enable OcuSync on their drones. The superior connectivity is basically the reason the Phantom 4 Pro V2.0 exists. For those of you that really want, you could try swapping some internal components between the gen. 1 and gen. 2 drones, then you might be able to hack the firmware to account for the hardware differences, and…. no, you really can’t get OcuSync on your original Phantom 4 Pro.

How long will DJI support this drone?

In a mechanical sense, DJI offered a basic warranty for the product, with the option to get an extended warranty. DJI Care Refresh has to be purchased within a certain time frame of buying the drone, and is good for up to two years (under some circumstances,) so you may be able to get it still, but only if the drone is still brand new. As for software, DJI is vague about how long they will support a drone with new firmware updates, but the last action we saw on the Phantom 4 Pro was in 2019. Because geo-fenced mapping is handled by the DJI GO 4 application, as long as your drone is operational now, it’ll remain so. We’ve never heard of DJI sending out a kill command to the software of any drone.