The French company Parrot is one of few top name drone manufacturers not based out of Shenzhen right now. Offering an impressive line of uniquely-styled fliers, Parrot likes to break out their aerial vehicles into two main categories, Minidrones and Drones. From there, Parrot Business Solutions handles their commercial side of things.

Looking into Parrot’s two categories, I would break out the devices into four groups, including boats, cars, quadcopters and airplanes. Do not get fixated on these four styles exclusively, however, as more than one of the drones merges two groups together. Promising a fun way to hit land, sea and air, let’s take a look at the Parrot drones lineup.

Mid-2017: Seemingly to compete with the DJI Spark, Parrot has slashed the prices of many of their drones. It’s as good a time to buy a Parrot flying machine as ever! Look for price changes in the links below. Also, Parrot continues to add value to the Bebop 2 quadcopter. Professionals will find new 3D modelling software and consumers can find new accessories and flight modes to get the most out of their drone.

Fall-2019: Parrot has not made an major moves lately, we know they are working hard on the commercial end of their offerings, with the Disco-Pro AG offering multiple payloads for inspection services, but the consumer side has been stale since the launch of the Parrot Anafi. We hope to see more from them soon.

As always, please allow us a moment to talk safety and best practices before we dive into the drones. If you are a regular to our site, there is not much to say that you haven’t already read. Most Parrot drones are large enough that they need to be registered with the FAA before you fly. It’s $5 that gives you easy access to the latest safety information on all things that go into the air in the United States. Obviously you’ll need to identify and follow the drone laws and regulations in your own country, and even in your specific state, city or community, and always remember to fly safe out there.

Keep in mind, it does not matter if you have to register your drone or not, you will have to follow the same rules of the air. Do you know what they are?

Related reading: Before you fly, things to know

I won’t go long on this, you can get into the specific safety and legal info through the links below. Starting off with, what we will call, the toy-class drones, the minidrones, this is where we will find the most diversity in the Parrot line. Keeping things small, lightweight, easy to control and fairly inexpensive, first time pilots and children may want to start here.

At just 54 grams, 0.12 lbs, the Parrot Airborne line offers two flavors for your tastes, the Night, which has bright LED headlights, and the Cargo, with mounting points for Lego/Mega-Blocks style cargo.

Control either by mobile application or opt for the controller for a few more dollars. Marketed to younger audiences, the Airborne drones are durable and promoted as being safe to fly indoors for about 9 minutes per charge. Get started with quadcopter flight for $80 straight from Parrot, or about $55 for the Cargo on Amazon or $32 for the Airborne Night today.

Officially replacing both the Airborne Night and Cargo, the Parrot Mambo is a slight more substantial drone, and one that takes fun to the next level. Two accessories define the Mambo, the first is a small ball launcher that mounts on top of the drone, ready to take on other drones in aerial battle, or just annoy a parent or sibling.

The second accessory has a bit more function and potential, a cargo clamp. The Grabber is a cute little clamp that is motor controlled for you to carry up to 4 grams of cargo. Simple enough, they advertise this as a fun way to deliver notes to a loved one.

The Parrot Mambo will run you $47 from Amazon. Alternatively, grab a refurbished Mambo for $55 on Amazon.

Taking remote control vehicles to the ground, the Jumping line of Parrot drones are two wheeled vehicles that scoot along the ground, then have the ability to leap into the air. The mounted camera is perhaps the most interesting bonus to the Jumping drones, with Race enjoying higher speeds but Night offering up LED headlights.

Take video from the ground at up to 8.7 mph with the Parrot Jumping Race and Jumping Night for $75 from Amazon.

I think the easiest way to explain the Hydrofoil is as a float attachment to a mini quadcopter. The genius is in providing two machines in one. The little quadcopter can fly alone, or attach to the floats to propel the boat portion through the water.

Check out the Parrot Hydrofoil for $35 on Amazon. 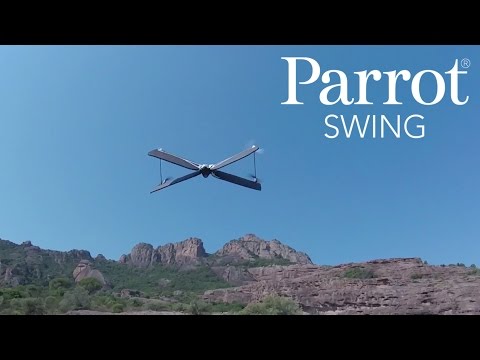 Blurring the lines between quadcopter and airplane, the Parrot Swing is an intriguing device. This is a large foam X-shaped dual wing design, you start with the propellers facing up. Throttle up to hover as a quadcopter, then as you move around you’ll eventually get to speed forward and the wings will bring you into airplane-like flight.

With the large flat wings providing much of the lift, the propellers are then able to produce higher speeds and much greater flight time. This is the first drone on our list that exceeds the U.S. mandated 0.55 lbs registration requirement – please register this drone with the FAA before you fly.

Check out the Parrot Swing for $39 from Amazon today.

Now we move onto the serious fliers. If you will, let’s say that it is safe to fly the minidrones in the house, excluding the Swing, obviously, but the following full drones are for outdoor enjoyment.

Unlike the minidrone segment, Parrot has only two styles of flying drones, including a couple variations on the standard quadcopter and another airplane-like machine. As you may have noticed, Parrot makes a lot of drones. Most of their machines are toy-class or commercial drones, with a few in between. Parrot likes to play with different designs, including fixed-wing planes and, like the AR Drone 2.0, standard quadcopters. The Parrot AR Drone 2.0 is like most of their machines, made of foam and plastic. This is great for making light-weight crafts that are easy to operate, and safe for young pilots.

Also seen in our Best Drones, Best drones under $500 and Drones you can fly with your smartphone lists

Following after the popular Bebop (1) the Parrot Bebop 2 finally bumps the onboard camera to 1080p resolution. This foam bodied quadcopter is a high flying, fast, lightweight photography drone. The drone itself can be purchased and flown via a connected mobile device, or you can seriously gear up with controller accessories.

Starting with the Skycontroller, a purpose-built remote control with far better range than your smartphone, and mount for a small tablet. Basically, this is the starter pack for Parrot’s efforts that match some of the larger and more expensive drones on the market.

Beyond streaming video to your mobile device, Parrot also has a treat called the Cockpitglasses. A VR style head unit for immersive FPV flying. The Parrot Bebop 2 recently received a software update that enabled several follow-me modes, unfortunately, they come in form of an in-app purchase through the mobile app, but at least it exists.

Check out the Parrot Bebop 2 for $350 as the drone alone through Parrot or Amazon. Looking within, the new Parrot Bebop 2 Power is an internal upgrade of parts and software to improve the flying experience. The same outward design now has greater range, an upgraded 1/2.3-inch camera that shoots at Full HD, and improved flight time. If you like the Bebop 2, but were hoping for a little better performance, the Bebop 2 Power has got you covered.

Check out the Parrot Bebop 2 Power for $645. (Currently unavailable.) When you need to be on the look out for green grass in your farmers fields, the Parrot Bluegrass takes to the sky with multiple cameras. Enough battery to cover 74 acres with an operating range up to 1.2 miles and Pix4D used as one of the flight and mapping solutions is a powerful tool for land owners.

Serious buyers will snap up the Parrot Bluegrass for $5,000 to inspect their crops. Built with the same crop inspection needs in mind, the Parrot Disco-Pro AG is an updated Disco for longer flights, greater range and higher end cameras. Able to put multiple cameras over 200 acres on a charge with the same 1.2 mile operational range, the Disco-Pro AG also uses Pix4D or Airinov First+ for mapping solutions of your crops.

Higher and faster flying, grab the Parrot Disco-Pro AG for $4,500 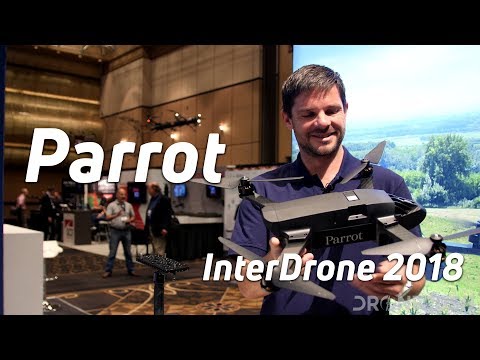 With a few unique designs in their stables, and a handful of majorly fun drones to fly, Parrot is a major contender in the smaller drone space. Keeping things under $1000 is a solid market strategy, but it does prevent Parrot from keeping up with players like DJI in terms of professional photography.

Appealing to younger fliers may keep Parrot in the air, but there is no question, they have some entertaining options to choose from.

Will you be taking home a Parrot drone for your land, sea or sky remote control fun?

Looking for something else?