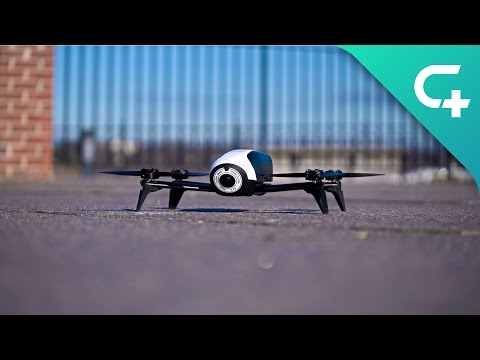 Parrot is no stranger when it comes to drones, having beaten a lot of today’s consumer-grade drone makers to the punch back in 2012 with the Parrot AR Drone. Since then, the French company has gone on to mostly produce compact-sized drones that are geared for entry-level users – or those just looking for something fun without a large cost and learning curve.

One of its latest models, the Parrot Bebop 2, follows the company’s recipe as a consumer-friendly model that’s compact in size, yet relatively easy-to-use from the onset. We’ve been spending some time with the FPV bundle, which comes with FPV (First Person View) goggles that allow us to view the action as if we’re actually strapped on board the drone. Before we dive into the nitty-gritty, let’s briefly talk about the specs of the Parrot Bebop 2. Much like the other drones in its stable, Parrot’s Bebop 2 is a quadcopter with four propel blades that help to lift/stabilize the drone, and reach a top horizontal speed of 35 miles per hour. On the end of the drone, there’s a 14-megapixel CMOS camera featuring a 180-degree fisheye lens with f/2.3 aperture, 3-axis digital stabilization, and 1080p video recording at 30 frames per second. Internally, there’s 8GB of on-board storage and you can either transmit files wirelessly to your phone or using a direct microUSB connection to your computer. And finally, it has a max range of 1.24 miles with up to 25 minutes of non-stop enjoyment on a single charged. Design-wise, the Bebop 2 is mostly comprised out of foam and plastic, ensuring that the weight is kept to a minimum, so that it doesn’t impede its performance. The best thing about the Bebop 2 is its compact size, which is considerably smaller than most consumer-level drones. However, one caveat we have with the design – especially after the introduction of the DJI Mavic Pro – is that the fixed design doesn’t allow the arms holding the blades to collapse and achieve a smaller frame when not in use. You don’t need to be a professional to operate the Bebop 2 – it’s just that simple and easy to use right from the get-go. That’s something we really like about it and it’s ideal for first time drone operators. The included Parrot Skycontroller 2 makes it simple to navigate the Bebop 2, as we’re given a cockpit’s view of all the action from the Bebop 2’s camera. Alternatively there’s also the Parrot FPV Cockpitglasses that gives us more of that first person view. It’s useful if there’s a lot of glare hitting your device’s screen, whether it’s an Android or iPhone, seeing that the smartphone is fitted into the inside of the cockpitglasses. As for the camera’s quality, we’re not particularly won over by it, mainly because it lacks the fine details to make it something we’d recommend for professional use. Quite simply, videos appear soft in tone, although we’re please by the Bebop 2’s built-in stabilization to keep the footage from being too jerky when the drone accelerates or decelerates in an abrupt manner. And don’t bother with low light situations, since it’s just a murky mess everywhere. Based on its current price point, a manageable $499.99 through Amazon right now, the Parrot Bebop 2 is being positioned as the go-to starter drone for those looking to move up from those “toy” models. However, it’s not mean to compete against the professional models that hover above the $500 threshold. It’s made more poignant due to the fact that you’ll have to spend some extra money to “download” features – such as a follow me/tracking mode. On top of that, it only packs 8GB of internal storage, with no expansion whatsoever. Therefore, in order to free up space, you’ll need to transfer files from it to your PC using its microUSB connection.

We’ll certainly say that it’s a fun little drone that has a lot of zip and value. You won’t be forking over such a huge investment in buying it, which is nice in comparison to what else is out there. Now if you don’t plan on getting too serious about drones, the Parrot Bebop 2 is worthwhile in checking out – something that won’t break the bank, but still fun to enjoy.