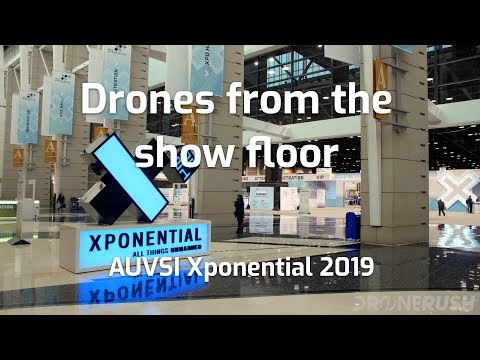 The drone industry as a whole is very financially rooted in the commercial and defense spaces. Not to imply that our favorite machines from DJI, Yuneec and more are a dead business, they simply clock in for multi-millions of this multi-billion dollar industry.

Truth is, the majority of booths at AUVSI Xponential this year were parts vendors. As an example, I believe there were seven booths that supplied nothing more than small gas engines to power larger fixed-wing drones, and another four or five that only sell propellers.

Don’t get us wrong, DJI was there with the Phantom 4 Pro RTK and Mavic 2 Enterprise, which are marketed to commercial use, but both machines would still make super consumer products. UVify was also on deck with the OOri and Draco, both of which are absolutely consumer drones and benefit from a recent price cut. Autel Robotics was also on deck, launching a new HDMI receiver box to enable and enhance your commercial usage of the Evo drone.

The above few drones are nearly the extent of consumer products, complimented by at least a dozen manufacturers of small form-factor commercial grade units. When you start looking at commercial machines that exceed that 55lb threshold to be considered a sUAS, players like Boeing, Bell, Airbus, Lockheed Martin and more had some exciting machines to check out.

We think you get the idea. Allow us to take this moment to let you in on a little secret. We here at Drone Rush have been following the industry long enough to learn that the commercial segment is the future of the drone industry.

We are not going to cut back on our consumer drone operations, but please be prepared to see plenty more commercial and defense grade machines. For military craft alone, we have over 400 machines we are evaluating for inclusion on the site.

Of course, you came here to hear about what we did see. Plenty of fun machines, be sure to watch that video at the top of the article, it is more thorough than we will be from here.

Drones of AUVSI Xponential 2019 in Chicago After introducing the UVify IFO at CES 2019, UVify realized that their new machine was a powerful platform, capable of much more than just drone light shows. In short, the “S” stands for swarm. Search and rescue is the easy use-case, putting multiple NVIDIA supercomputer drones into the sky at the same time to find a lost hiker. Also easy to consider the drones flying in formation as a sort of signage.

We’ll soon be able to help you narrow down the best configuration for your needs, but for now, contact UVify directly to discuss your options. 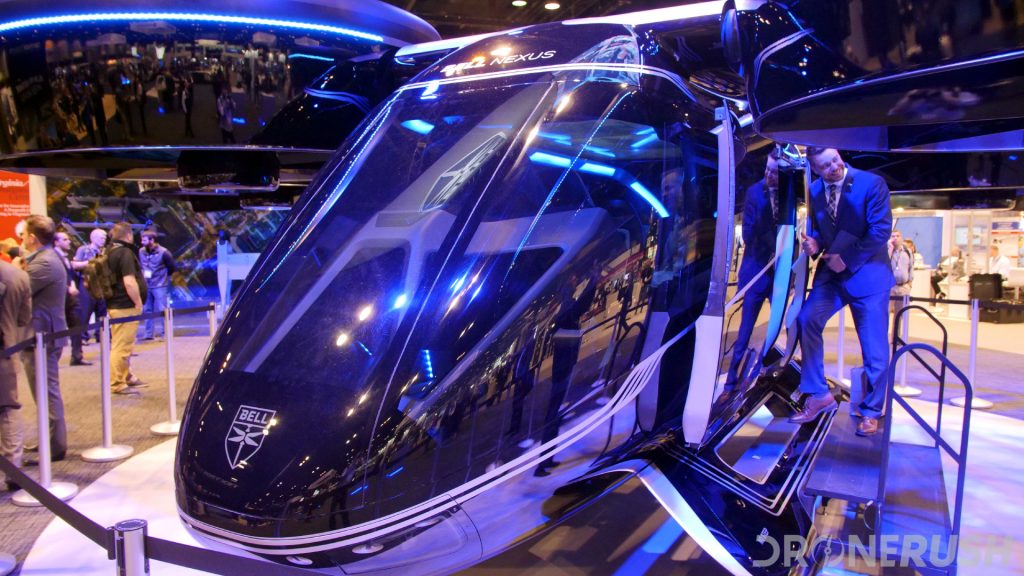 Another machine we’ve seen from CES 2019, the massive, luxury-class passenger drone was at Xponential this year as well. With four rear seats, and a front cockpit, five people will be able to take to the sky. The size of the craft will limit it mostly to operational helipads and airports, but the idea of a flying subway system is enticing.

We’re still a few years away from going for a ride, but the concept is pretty exciting. Like it or not, these are military craft. With the introduction of the F-22 fighter jet, the U.S. Military realized that they could have an intelligent squad leader in the heat of the action. In an effort to reduce risk to life, the idea extends to having one manned aircraft surrounded by a group of drones. A battle for air superiority does not have to result in loss of life.

The reality is, however, most air operations these days are for reconnaissance; I am more comfortable with a remote machine having a direct human overseer myself. We had the chance to meet up with Inspired Flight at the show. We learned of their approach to quality before we ever saw their drones, which are mostly build-to-order commercial craft designed for whatever your needs may be.

They had two drones at the booth, one with a powerful Sony camera, wide array of Intel RealSense obstacle avoidance sensors and a parachute, the other held a LiDAR USA infrared canon, perfect for search and rescue or law enforcement operations. The folks from DJI did not bring much new to the show, but that doesn’t change that the Matrice 200 series, Phantom 4 Pro RTK and Mavic 2 Enterprise are some of the most versatile small form-factor drones on the market.

As always, however, their flight simulator was one of the larger draws to the booth. We owe you an apology. When we first heard of Indemnis, we assumed they were just a random accessory manufacturer, specializing in parachutes for your drone. I guess that is accurate, they certainly are specialists in parachutes for your drone. Each setup is custom to the machine, and adheres to strict standards of design and operation in order to satisfy risk mitigation when you apply for an FAA waiver.

If you are looking to fly your drone over people, an Indemnis parachute may make the difference in acquiring authorization to fly. We’re looking to put some drone lighting to the test, with the basic consumer approach in Lumecube, this powerful drone accessory is enhanced by Luminell, who build massive, bright panels of LED lighting.

Let’s be fair, if you are planning to shoot an indie film about alien abduction, these are the lights you’ll want to use as your alien spaceship. Of course, we can imagine other more appropriate uses, like emergency lighting for search and rescue, but still good for having some fun. This is the box we’ve wanted to accompany our DJI drone for a long time now. Wirelessly transmit your livestream video from your Autel Robotics Evo into this box, it connects to your TV or external recorder (and more) to provide real time information back to a mobile command station.

In my case, I’d love to set it up for family to watch on the big screen as I fly around outside. Through their various branches, Boeing has been working hard on many uses for unmanned aircraft. You may have heard of the Insitu Scaneagle, the drone that is helping dramatically with forest fire fighting efforts. From there, their Aurora division is working on a passenger drone, and the HorizonX team is working on cargo bots.

I probably don;t have to tell you that Boeing is a massive airline company, these few machines are just the tip of the iceberg for this company. We have always been a fan of the open-source approach to life. Like-minded people working together to solve similar problems and create amazing tools for everyone to use. Usually for free! A growing number of organizations, including Auterion, UVify, Inspired Flight and more, are on-board with Dronecode, all are active contributors to the PX4 flight stack, which is the software driving many drones out there today.

We applaud Dronecode and their partners for this approach, we are happy to see them overcoming obstacles together, all to make better drones for us to fly at home. Showing off efforts on infrastructure in the energy market, PrecisionHawk unveiled PrecisionAnalytics. This is a powerful AI driven software platform that helps put your data to use. In a survey and inspection operation, a drone may capture hundreds, even thousands of images in a day. What do you do with all that? This software brings it all together, can self-analyze differences found in the same shot at different times and then intelligently highlights potential issues for you.

In the example, the software highlighted cracks in a top cross-beam of a telephone pole. Something you would not be able to see from the ground, requiring the time consuming process of sending a person up there, or not identifying the issue until there is a failure. Drone images are very helpful, keeping all those images organized is just as important. Black Peak Engineering may not be the makers of simple aircraft, but we had a super conversation with them on the topic of pilot competency. Successfully flying a consumer drone in your backyard may be your introduction to airspace operations, graduating up to being a certified Part 107 pilot is an important next step, but as far as professional avionics is concerned, that’s still only a starting point.

You’ve likely seen some of the pilot-speak that a pilot or air traffic controller uses to communicate for a flight. It is absolutely mandatory for a manned aircraft pilot to know this language, in the event that you are operating a larger UAS out of an airport, for example, you’ll still need to know what to say to request clearance and understand the instructions provided by the ATC.

Aside from communications, don’t forget about best practices for craft operation and team safety. These are topics we’ll explore more in the future. Thank you to Steen of Black Peak for the fun conversation.

Get your Part 107 certification

While we all appreciate seeing a finished product in flight, conventions like AUVSI Xponential are made for sealing deals behind the scenes. Propeller manufacturers team up with motor and engine manufacturers to make a powerplant for a frame manufacturer to install. Then an ESC manufacturer and flight controller maker work with the software companies to handle flight operations. Not to mention then the camera makers and post-processing companies that turn your images and video into actionable data.

Perhaps more important than the craft themselves, flight is actually fairly easy, believe it or not, this is an opportunity for the industry to get together to talk about things like laws and regulations, an interface with the FAA and more to establish best practices and prove safety to make your next flight easier to manage.