The DJI Osmo Pocket is a great drone camera

The DJI Osmo Pocket is a great drone camera 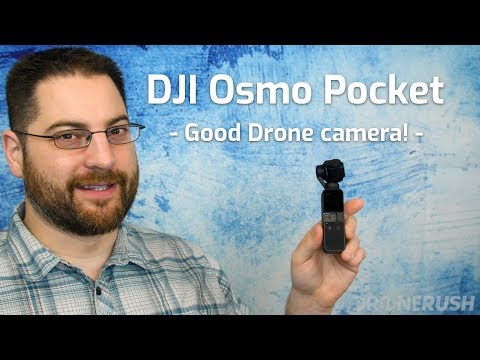 I don’t care that DJI made the new Osmo Pocket as a portable hand-held camera, I just attached it to a drone and I’m pretty pleased with the results. We already know DJI makes great drone cameras, and the Osmo Pocket has been impressing people with its intended use, I just like to think outside the box sometimes.

Make no mistake, the Osmo Pocket is not the perfect drone camera, but if you’ve got a less capable drone, this could be an ideal upgrade. Equipped with a 4K shooter and 3-axis stabilization, the Osmo Pocket is hit store shelves in mid December, 2018. Actually, as I write this, the accompanying DJI Mimo app has been available for download for only a few hours.

The camera is a 1/2.3-inch, 12MP sensor, it records 4K video at up to 60 frames per second and records at a data rate of 100Mbps. The Osmo Pocket weighs in at just 116 grams, making it an easy lift for most drones.

We’re still trying to identify if this is the same sensor as you’d find in the newer Mavic 2 Zoom, but we’re guessing it’s the same as the Mavic Air, based on the image quality we’re seeing.

Aside from telling you that the camera and permanently attached handle are very light-weight, with battery life of nearly two hours per charge, it’s probably best to just point you toward our review. My experiment attaching the Osmo Pocket to a drone has been enlightening. Primarily, I have learned that it takes far more than just a 3-axis gimbal to produce clean drone video. The ability to spin, rotate and turn are very important, but vibration dampening is really what matters while you’re up there.

There are many great drones on the market that are ready to go as is. As mentioned above, DJI is a leader in this segment, offering a handful of quadcopters that can capture smooth video from the sky. We’ll give credit to players like Yuneec, Autel Robotics and Parrot for offering smaller machines as well. We’ve got a big list of the Best camera drones, check that out for more.

The first thing I did with the Osmo Pocket was attach it to the top of the Mavic Pro. I attached it firmly so that it was secure, and I expected the gimbal to work its magic. The result? Not so great. My second attempt was a winner. After 3 minutes of messing around with elastic bands, the Osmo Pocket was precariously dangling underneath the 3DR Solo.

At first, the camera was free to swing around fairly wildly. You need some swing to help keep the image smooth and natural looking, but this was too much. After a few more minutes of fussing, the camera was suspended by three points, ensuring a balance between the points and that things were loose enough that vibrations from the drone were not directly transferred to the camera.

I would have just attached the camera to the dampened gimbal holder of the 3DR Solo, but the Osmo Pocket is not heavy enough. The built-in dampening is too firm. The Osmo Pocket is designed to operate stand-alone or use the adapters to directly attach your phone with the DJI Mimo app installed. These two operation methods are fantastic in their own right, but do not exactly lend to aerial activities.

DJI introduced accessories to enhance your Osmo Pocket experience, including a Wireless Module. Using both Bluetooth and Wi-Fi, you can connect your phone to the camera wirelessly. Perfect for controlling the camera while it’s up on a drone. Range is not spectacular, please keep this in mind. I put the 3DR Solo about 100 feet into the air for that initial run, the app still worked to control the gimbal, but the live video stream was beginning to lag a little. I will certainly range test the next time the sun is out, but for now, I am comfortable saying you can get up to 100 feet connectivity with direct line of sight.

The experience is very much like many other DJI drones. The remote control handles navigation tasks, the phone shows off the live view from the camera and accepts controls to take photos and record video. Best of all, the app lets you control the gimbal of the camera, up, down, left and right. The only real word of warning, stick to a a drone that can operate safely with just its remote control. The Mavic Pro and the 3DR Solo both have displays built into the remote to help with navigation and telemetry. Battery life, if nothing else. This way, I can attach my phone to the remote and operate the Osmo Pocket as though it is the actually drone camera.

I am so pleased with the results of this experiment. I had expected a bit of wobbly footage, but in the end I did not think things would work quite this well.

Managing the dampening system was just a matter of playing with elastics, and the entire assembly weighs so little, I plan to try it on smaller drones next. With a price tag of $349 for the Osmo Pocket, $59 for the Wireless Module and then the cost of a drone, this may not be the game changer I thought it might be when I started flying earlier today, but it’s still a compelling purchase. I shall test next on the ~$100 Hubsan H502S Desire. That makes a total flight cost of approximately $500. Assuming I can get the dampening figured out, I’ll be able to capture DJI Mavic Air caliber video for ~$129 less than buying a Mavic Air.

Keep in mind that the Osmo Pocket has more uses than the Mavic Air. However, the Mavic Air is far more capable in the air than any $100 drone. Trade-offs that you’ll need to justify for your needs. For me, I’m sad I have to send this review unit back soon. Good thing the Osmo Pocket is officially shipping to customers starting… now.