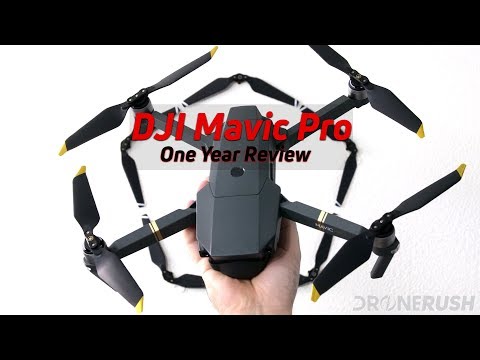 It’s been over a year since DJI announced their compact, folding drone, the Mavic Pro. For most of us, early shipping delays cramped our style, but by mid-November 2016 this great machine was landing on store shelves.

We took a road trip to Los Angeles to get our hands on the Mavic Pro during a flight training day hosted by DJI. Shortly thereafter one could just hop on Amazon to get this new quadcopter.

We’ve been flying it for a year, we figure it’s time to revisit our review – here is our DJI Mavic Pro one year review. (Originally posted November 2017)

Update September 2018: With the arrival of the DJI Mavic 2 Pro and Mavic 2 Zoom, this is the last time we will revise this article. It is time to retire the original Mavic Pro a little bit. We still think highly of the Mavic Pro, it’s a solid performing machine that has never let us down, the simple truth is that the updated Mavic 2 series is superior in almost every way, particularly in the camera. We dare say, if camera output is not your concern, the original Mavic Pro will only become a better purchase as the price continues to drop. First, this is not a comprehensive review, if you want to learn all of the specs and features of the Mavic Pro, I’ll point you toward our coverage from the last year:

What we want to do today is talk about the Mavic Pro from an ownership perspective. Do we think we got our money’s worth from this machine? Is it still worth buying today? How did our last flight differ from our first flight? And so forth.

Quick update March 2018: The only thing changing our mind about the Mavic Pro is the Mavic Air. We’re not saying the Mavic Air is a better drone, but it has certainly dominated our flight time in the last month. More on the new machine here:

When is the Mavic Pro 2 coming out?

Oh, how we wish we could answer this question already. We know that DJI had an event scheduled for July 18th, 2018, but it was cancelled. We could only guess what they were looking to release, but the leaks and rumors of a the Mavic Pro 2 were all around. Speculation is fun, check out our Mavic Pro 2 rumor roundup.

The musings of a Mavic pilot Let’s just get this out of the way up front, the DJI Mavic Pro is still my favorite drone. It’s not the best drone, it’s not the smallest, not the most capable, but no other machine has been as reliable and convenient.

I’ll have plenty to say about convenience and portability later in this review.

For my needs, which have mostly been as a hobby pilot, the Mavic Pro is capable enough. The camera is certainly not as good as that of more expensive drones, but it’s a solid 4K shooter, more than good enough for home video and some pro shots in the right conditions.

The leather bag that came with the Fly More combo is still my main travel pouch for this Mavic Pro. It’s a perfect fit for the drone, a couple batteries, the ND filters, a few spare propellers, micro SD cards and the remote. Newer accessories do not fit, so I haul along the remote sun shade and propeller guards separately. They fit nicely in the bag I use for the DJI Goggles, so no real hassle there.

Flying the drone is as good as it was the day I got it. This is where I admit that this machine is not without its issues. To be fair, it is the Android app that is the main culprit. The drone and remote seem to communicate flawlessly, the drone does what it’s told and performs at its best at all times.

Connecting the Android app also works flawlessly. But then the app acts up, the video stream freezes, it disconnects from the system and you are left flying blind. In the early days, I had this happen to me multiple times per flight. In my last day out, I depleted all three batteries, nearly an hour in the air, and I only had to restart the app once with maybe three or four times that the video froze for a few seconds. I used to be afraid to fly my Mavic Pro using DJI GO then DJI GO 4 on an Android device. I take to the sky with cautious confidence these days. DJI GO 4 says I’ve flown 62,235 feet while using the app. It’s too bad it’s missing all of my flight data between January and October of this year, I’ll see if I can recover that into my cloud account from the manual backups I take every month. It also doesn’t read my airtime while using Litchi.

The best part of owning the Mavic Pro is portability. Don’t give into the idea that the Spark is more portable – the Mavic bag and the Spark bag are shaped differently, but are almost the exact same dimensions. Mavic is heavier, but as far as travel size goes, I grab the larger, more powerful and capable drone over the smaller one every time. With hundreds of flights under my belt, my Mavic Pro is not without a few bumps and bruises. I have crashed this drone only once, in the early days when the app seized up and I made the mistake of flying by FPV display instead of picking my chin up and watching the drone itself. Grrrr.

For that incident, I flew into a hillside. Actually, I might have cleared it, but a single bare stick of a tree branch contacted a propeller, from there it was just a couple feet into the ground. That one crash broke all four propellers and cracked one of the front light covers. I got lucky, my ego was bruised more than my drone.

Propellers are fairly resilient, but are consumables. I have worn out a full set of props from plain use. Packing the drone into the bag, taking it back out, flying in heat, in sub-zero and once in dusty conditions. It all takes its toll. I currently have the new Mavic Pro Platinum propellers installed on the drone. My intent was to record a video to show you how much more efficient they are. I have footage proving that they are quieter, I can tell you that they spin about 100 rpm slower to maintain hover, but I won’t be able to show you that until I get my next set.

These new Platinum propellers are longer and thinner than the originals. As I was landing the other day, I came down into a flat patch of grass with some pretty red fallen leaves. I lowered slowly to blow the leaves away, but one managed to swirl around and contact a propeller. I thought nothing of it until inspecting to find a crack in the tip of the blade.

I am not calling the new Platinum propellers cheap, but I’d hit dead leaves on the ground with the old propellers, without a crack. In the big picture, the Mavic Pro and remote are holding up very well. Pieces are not loose, hinges and screws are as tight as ever. Even the little edges of the remote antenna that click together are in good shape, I was sure those would have worn out.

I feel like I’ll get years of use out of this drone, I am pleased with that.

Should you buy a Mavic Pro? This is a difficult question to answer. I fully support the Mavic Pro, it is a great drone for the non-pro pilot. A hobbyist may not want to invest over $1000 to get a solid flight package with the Mavic, it’s not the ‘every-man’s drone’ as far as cost goes.

The biggest reason I would hesitate to purchase the Mavic Pro today is the existence of the Mavic Pro Platinum. More than just a new color, you’re looking at a machine with updated ESCs and those new propellers. Overall, the Platinum is far more efficient, gaining a good amount of flight time and reducing flight noise. Is the Mavic Pro Platinum worth the extra $100 or the original Mavic Pro? Yes. Is it worth upgrading from the original to the Platinum? No. If you already have the Mavic Pro, buy the new propellers and accept that you can only fly 27 minutes instead of 30. But that’s just me talking.

Finally, you never know when DJI might be releasing a new drone. A Mavic Pro 2 might have added obstacle avoidance sensors, an updated camera and an optional remote control with built-in display. If that were to hit the market the day after you buy a Mavic Pro, rest assured, you still have a solid machine with years of great flights ahead of you. The DJI Mavic Pro maintains its original price of $999 for the base drone package, $1299 for the Fly More combo with additional battery and the leather bag. Do stay tuned for holiday sales, and, if a new Mavic were to hit the streets soon, we’d hope to see a reduction on this machine. My personal guess is to expect something new, or at least a price reduction in early 2018. Update: The Mavic Pro has been consistently selling for around $800 with the Fly More combo running about $1100. These are not the lowest prices we’ve seen, so watch out for sales.

I say again, the DJI Mavic Pro is a superb drone for a hobby pilot. It’s a thrill to fly, the resulting photos and video are more than good enough to enjoy and the growing software capabilities and accessories, like the DJI Goggles, keep it feeling new.

Do you have a DJI Mavic Pro – how has your experience been over the last year? For us, as our initial review boldly states, this is still our favorite drone.