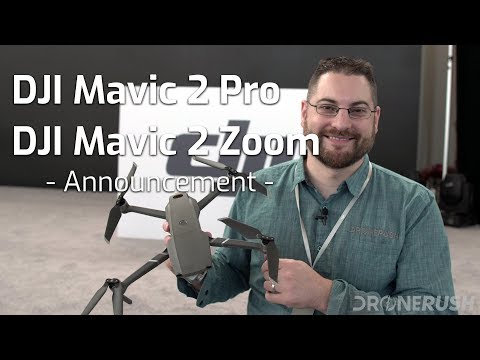 DJI changed the landscape of consumer drones when they launched the Mavic Pro in 2016. The compact, folding quadcopter has inspired a generation of portable drones with 4K cameras. Taking things to the next level, DJI is now releasing the Mavic 2 platform.

Over 144 people have been saved by drones, putting a camera in the sky to help find lost hikers and more.

DJI put two years and thousands of man-hours designing a replacement for the original Mavic Pro.

Many in the drone community were excited to see new products from DJI launch in July. As I’m sure you’ve heard by now, that event had been cancelled, leaving fans in a lurch for a couple weeks before announcing the new August event. As best we tried, we were unable to learn the reason for the delays.

During that gap, leaks and rumors hit the airwaves. Some of the rumors proved to be accurate, such as the Pro model rocking a full 1-inch camera sensor and the Zoom model enjoying a 2X optical zoom. Call them what you will, this is one drone with two camera options. The new drone is a pleasant update to the original Mavic Pro. The overall look and feel remain the same, which keeps us happy, at least. The front propeller arms still fold back, and the rear arms still fold under, for example.

Obstacle avoidance sensors have been beefed up, adding rear facing collision detection and increasing the effectiveness of the front and downward facing sensors. Side facing sensors have also been added, bringing the Mavic 2 on par with the Phantom 4 Pro for avoiding hitting a wall. Ten sensors in total keep you safe in the air.

There is also a downward facing LED light that automatically turns on when landing. Safety first! The front-facing camera is suspended below the nose of the drone. A 3-axis stabilized gimbal promises the same silky smooth footage we’ve come to expect from DJI. Both new cameras shoot 4K video at 100Mbps. For the frame rate fans, sorry, 4K is still shot at 30FPS.

Despite earlier rumor suggesting a new 1/1.7-inch camera sensor, the Mavic 2 Zoom maintains the 1/2.3-inch sensor size of previous Mavic drones. That said, we’re looking at a new 12MP camera with a 24-48mm optical zoom. Double that again with a 2x digital zoom for a tight 96mm focal length. Working with the extra pixels on the camera sensor, this enables that 96mm focal length to be lossless when shooting at 1080p resolution. You’ll only start to see that digital zoom image stretching when shooting in 4K. Still 24-48mm is a great focal range for a drone.

48MP picture stitched together from the Zoom camera. This mode is called Super Resolution. HDR captures 13 stops of exposure for the Zoom, 14 stops on the Pro.

While the Mavic 2 Zoom offers great camera modes, the Mavic 2 Pro is what DSLR fans will want to fly. Teaming up with Hasselblad, the Mavic 2 Pro rocks a 1-inch sensor with a 10-bit color profile. This is a 20MP shooter with 28mm wide angle lens. Like the Mavic Pro before it, look for a wide range of manual camera controls on the back end.

You can change the aperture on the Hasselblad camera using a dial on the remote.

Perhaps one of my favorite features is that full photos are instantly saved to your mobile device in full resolution. This eliminates a step in the process of sharing your images. DJI considers time to be the fourth dimension to aerial photography. There are now four hyperlapse modes: Free, Circle, CourseLock and Waypoint. One click can capture a fun hyperlapse video that benefits from the silky smooth video we’ve come to appreciate from the Mavic Pro.

Dolly Zoom is the name of the game. A proven video technique that zooms in on the subject while the camera pulls out, or the other way around. It’s a fantastic look, now one click away. A fun addition to DJI’s Quickshot modes. First and foremost, the Mavic 2 Pro and Mavic 2 Zoom both come with OcuSync 2.0. We were huge fans of OcuSync before, but the new version is a solid upgrade. In addition to multiple simultaneous controller and video feed support, OcuSync 2.0 offer full 1080p video streaming up to 5 miles out. For reference, OcuSync on the original Mavic Pro streams 1080p at close range, but drops to 720p with a maximum range of 4.3 miles.

Where it is legal to do so, you’ll get out to that maximum connection distance faster than before as well. The Mavic 2 platform reaches up to 44 mph and has an increased maximum altitude as well, over 19,000 feet above sea level.

Flight time has also been improved. Mavic 2 drones are equipped with high-efficiency props and ESCs like has been introduced in the Mavic Pro Platinum and Phantom 4 Pro V2.0 drones. Expect your Mavic 2 Pro or Mavic 2 Zoom to enjoy up to 31 minutes in the air. This from the same size 3,830mAh removable battery as before.

If you miss the Fly More combo at first, $319 will get you the Fly More kit. Additional batteries, extra props and more.

Also, enjoy DJI Refresh and other programs, such as the new Trade Up. Both of these great looking drones are available for order now, with shipments set to begin now!

The great news is that these drones differ in price based on the camera, so no matter which you choose, you’ll enjoy a solid flying experience.

Please stay tuned for more coverage, we are at the DJI launch event now, putting our hands on all the great drones and cameras.