We were very pleased with the Yuneec Mantis Q when it arrived, a compact, folding drone from a brand we respect and trust. Problem was, the drone was solid, but the camera was hard mounted. Yuneec took all that criticism to heart, now releasing the updated Yuneec Mantis G. Where “G” stands for Gimbal.

We had the chance to go hands-on with the Yuneec Mantis G at InterDrone 2019. First impressions were exactly the same as for the original Mantis, and then we turned to the camera. 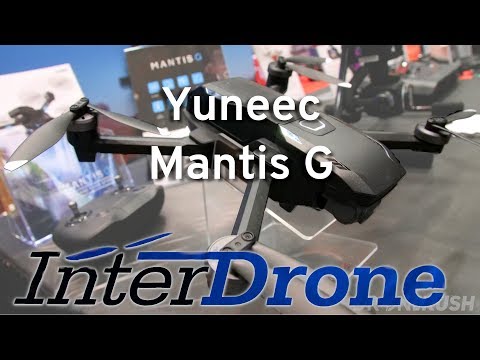 As you just watched, the Yuneec Mantis G is a little bit more than just the Mantis Q with a new camera setup, they’ve made a few improvements as well. That updated camera gimbal is the key feature though, adding the one thing that we all thought was missing in the original drone.

With that out of the way, stay tuned for a better review when the drone actually hits the market. The newer machine is a little faster, has far better range and, of course, now includes a stabilized camera Gimbal. Here at the beginning of September, 2019, we’re sad to say that it will be at least a month before you’ll be able to fly your own Yuneec Mantis G. Yuneec has not offered us an exact launch date, but was clear that it would be available in October 2019.

The price at launch for the Mantis G will be $699. Assuming the camera is able to compete with the likes of the DJI Mavic Air, that makes the new machine a very competitive option. You can be sure we’ll put the Mantis G to the test, we’re interested in how it’ll stand up as well.

What are your initial thoughts on the Yuneec Mantis G?