Today is the day, folks, it’s August 29, 2017 and the folks at Yuneec just informed me that their latest drone is ready to go, we can all now purchase the Yuneec H520.

We first put hands on this drone at CES 2017. This is where I must make an apology, I lost the audio of that experience, else I’d have a video of our excellent interview from the show. Let me just say, if you are looking for a powerful and versatile commercial drone, this is a superb machine to consider. At its core, the Yuneec H520 is a beefed up Typhoon hexacopter. Smaller than the H920 series, but just as tough. The drone utilizes the best of accessories, connectivity and, especially, cameras that Yuneec has to offer.

The key to the Yuneec H520 is the interchangeable cameras. Swap between the E50 or E90, with 1/2.3-inch CMOS 12MP or 1-inch 20 MP sensors, respectively. Beyond normal optics, install the CGOET infrared camera for law enforcement or power line operations. It’s not stated in the online description at this time, but were were told that the H520 will also accept the existing CGO3 and CGO4 cameras that you’d get on the Typhoon. We’ll be sure to update if that is no longer the case. The base drone purchase will get you two batteries, the airframe and the ST16S remote control. No camera. While in the air, the landing gear lifts out of the way to allow 360 degree camera rotation. The H520 has a take-off weight of about three and a half pounds with camera installed, scoring a flight time of up to 28 minutes. While up there, scoot along at a stabilized ground speed of about 30 mph, ‘sport’ mode closer to 40 mph.

The ST16S ground station is a remote control I wish I could use for more drones. It runs Android, has 16 channels of connectivity, a built-in 7-inch display and a range of about 1 mile. We do not have an Amazon link yet, which we find offers the best shipping options for most of the globe, and usually a discount over going direct to the manufacturer. That said, you can go straight to Yuneec to grab the Yuneec H520 for $1999.99. The E50 camera can be had for $1099.00 and the E90 camera for $1299.99. You can grab additional batteries and propellers as well. We’ll save that for another day.

Stay tuned for more coverage of this drone and more from Yuneec. We will be meeting up with them at InterDrone in early September, hopefully we can revisit that Yuneec H520 demo and interview, and maybe there will be something new to look at as well.

Catch Yuneec’s demo video after the what’s next section below: 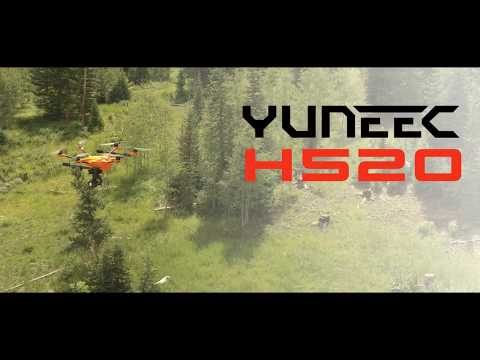