Drones
By Jonathan Feist4 days ago 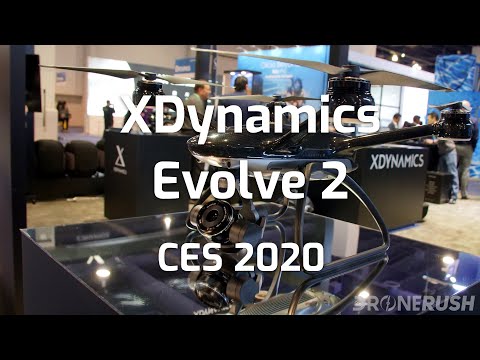 We’ve been silent fans of XDynamics for a while now, we like their drones and it’s time we spoke up. Announced at CES 2020, the XDynamics Evolve 2 is an impressive machine, the kind of quadcopter that might give the DJI Inspire series a run for its money.

The key spec of the Evolve 2 that we like the most is the micro four thirds camera, that accepts many Panasonic and Olympus lenses. Of course, we reserve all judgement until we fly it, but we’re liking what we’re seeing.

Overview of the XDynamicx Evolve 2 A carbon fiber chassis is complimented by a magnesium belly that offers cooling and flexibility for the drone. The XDynamics Evolve 2 is, make no mistake, an iterative update to the initial Evolve drone that we put hands on briefly at CES last year. It is made in the United States, if that’s important to you.

The new Evolve 2 is a little larger than the original Evolve. We’re talking about a frame that is 543mm in diagonal, that’s more than 100mm larger that previous, it’s about 10 inches tall and weighs a little under 5 pounds. My DSLR with the same sensor is basically the same weight, great work on that.

In the air, expect to see around 33 minutes of flight time, with speeds up to 60 mph. The XDynamics Evolve 2 drone offers a carbon fiber fuselage and propeller arms with magnesium undercarriage, plenty of power and flight time, and a slick micro four thirds camera. The payload makes the purpose of this machine very clear, this is a high-end camera drone.

The original Evolve drone was a good stepping stone for the company, but now that they've learned how the market works, we're glad to see the huge jump from a 1/2.3-inch camera up to a micro 4/3 system. The camera we use to record our videos for the site, the Panasonic GH5, is the same size of sensor, and cost close to the same price as the Evolve 2, with lenses. we have very high hopes for a machine with a camera of this caliber, and we look forward to putting some of our lenses on this drone. The XDynamics Evolve 2 also offers crazy connection range, clocking over six miles of connectivity. Laws make it hard to use this in the Unites States, but waivers can be had, and other countries can take advantage of this. The real story here is the new camera. A micro four thirds sensor is housed in a 3-axis stabilized gimbal. You can attach many small form-factor m43 lenses to it, they referenced Olympus and Panasonic lenses. The housing around the gimbal frame is fairly narrow, so don’t expect to put a big zoom lens or anything. My Panasonic 25mm f/1.7 appears will fit great, for example.

This caliber of camera is exactly on par with my DSLR, so I expect fantastic video recording capabilities. It may be unfair to suggest that micro four thirds falls short for photo capture, but that is as a comparison to higher-end DSLR cameras, this sensor will vastly outperform anything that the 1/2.3-inch sensor of the original Evolve could do.

We’re excited to put the drone to task for ourselves, eventually. According to the folks at XDynamics, you can order up your Evolve 2 now for a $50 down-payment. Your final bill will be $3,699 and the drone should start shipping in April 2020.

Stay tuned for more new drones and coverage from the show floor of CES 2020.

By Jonathan Feist4 days ago