Legal and Safety
By Jonathan FeistJanuary 20, 2020 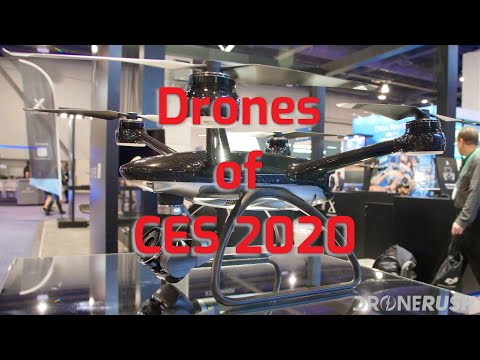 CES wrapped up on January 10th, 2020, but our drone footage took as week longer to publish. There were a few new machines, and some interesting new technologies from the show floor. Bottom line, 2020 is off to a solid start, we can’t wait to see what drones come next.

Our highlights from the show include the 8K camera of the new Autel Robotics Evo II, the versatility of the PowerVision PowerEgg X and the DSLR-level camera of the XDynamics Evolve 2. The V-Copter was pretty cool as well.

We started our adventures at DJI, they did not have anything new at the show, but this was the first public event for the Mavic Mini, and we gave them an award for their Robomaster S1 robot. With an 8K camera option, backed by a 6K camera with 1-inch sensor, the Autel Robotics Evo II is a step above most drones today. Rocking 40 minutes of flight time, and improved range, we’re excited to take control of the sticks, put this new camera beast to the test. Next up is the XDynamics Evolve 2. It may be tough to justify this machine as a fun flyer, but serious aerial cinematographers should take a look. Powered by a micro four thirds camera sensor, you can swap out lenses to get the best shot from the sky. It would be fair to compare the Evolve 2 to the DJI Inspire 2, if that helps put things into perspective. The XDynamics Evolve 2 drone offers a carbon fiber fuselage and propeller arms with magnesium undercarriage, plenty of power and flight time, and a slick micro four thirds camera. The payload makes the purpose of this machine very clear, this is a high-end camera drone.

The original Evolve drone was a good stepping stone for the company, but now that they've learned how the market works, we're glad to see the huge jump from a 1/2.3-inch camera up to a micro 4/3 system. The camera we use to record our videos for the site, the Panasonic GH5, is the same size of sensor, and cost close to the same price as the Evolve 2, with lenses. we have very high hopes for a machine with a camera of this caliber, and we look forward to putting some of our lenses on this drone. The XDynamics Evolve 2 also offers crazy connection range, clocking over six miles of connectivity. Laws make it hard to use this in the Unites States, but waivers can be had, and other countries can take advantage of this.

The PowerVision PowerEgg X may appear as an average mid-range consumer drone on paper, but the well thought out features and accessories make this machine very functional. Use it as a drone, strip it down to use it as a camcorder, hand strap included, or enclose it in its shell and attach the floats to make this a waterproof drone that can land on water. Pretty cool! Aside from that, we enjoyed a chat with Whitefox, talking about their Scorpion 2 and other counter-drone technologies. The teams at Robosea and Chasing had their fun submersible drones on hand again, including the big shark. Fluidity gave us a fun update to their systems, reminding us to process the firmware updates and stay tuned to what comes next — Flying cars! Swellpro announced the Spry, waterproof drone, at CES 2019, followed by the Spry+ at CES 2020. Compared to their previous models, this is a compact machine that floats on water and enjoys time in the sky. The 4K camera sits inside of a waterproof housing that submerges below the surface when the drone sits on water. You can fully submerge the drone, but it does not dive on its own, it's made to float. The Spry+ puts the GPS antenna in the disk on top, enabling better connectivity even while the drone is mostly submerged.

In case things go wrong, the remote control is also waterproof and made to float, making the Swellpro Spry one of the only drones you can safely take out surfing and kayaking, never mind boating or just flying at the lake.

The folks at Zero Zero Robotics were very popular, as the V-Copter drone captured the imagination of many. A fairly simple drone, if you ignore the 40 minute flight time and the fact that it only has two propellers. We did not manage to connect with the team behind the Micro Drone 4.0. They were there and looked excited about their machine, but we’ll have to wait to get our hands on one to try it out.

Last, we had a solid chat with Brendan Schulman of DJI. We enjoy these regular chats about drone laws, and this year was packed with the topic of Remote ID and upcoming changes to hobby pilot certification.

We hope you enjoyed our coverage of CES 2020. This isn’t the premiere show for drones, so please stay tuned later in the year for AUVSI Xponential and Interdrone, if nothing else.