Military drones are taking over the skies. Not only are they being used to fight wars, they are also in use for tasks such as security and traffic control over non-warring territories. They are also powerful tools to help fight forest fires. There are many uses for the many military drones, and we’re happy to report that they’re not all just killing machines, particularly the ones equipped for life-saving efforts.

Surveillance is the main use of the average military drone, gathering intelligence to save lives, and report speeders on freeways. We don’t want to get caught up in the politics and ethics of unmanned aerial vehicles in warfare, we are just here for the technology.

A few of the military drones in our list

Side note: I was driving past an Air Force base recently, just so happens that it was presentation day, I could hear patriotic music playing as a Reaper circled above. Best part, another Reaper paced me along the runway as it took off to join it’s partner in the sky. I wish I had clearance to participate.

Before we begin: I am originally publishing this post on November 11th. This is Remembrance Day in some countries, Veterans Day in the United States. I want to take a moment to thank all who have served, especially for their sacrifices to keep us safe. I know that I get to fly a hobby drone without fear of personal safety because of your efforts. My family members that served in the Air Force got to fly home safe, I wish that all families of all airmen could say the same.

For all of the men and women who served in any capacity but did not make it home, you are remembered.

To all that have served to defend the innocent and are still with us, I thank you.

Military drones come in many shapes and sizes. Most of us think of the larger Predators, Reaper and the Global Hawk, but we forget about the smaller machines with more specific uses. The Global Hawk has a wingspan of almost 131 feet, but the Black Hornet Nano easily fits in the palm of your hand. Flying most military drones is also nothing like flying our quadcopters at home. I can easily manage all aspects of a DJI Mini 2 by myself, whereas, it takes four trained operators to control the ground station of the MQ-4C Triton.

Most branches of the military classify these aircraft in several ways. Some by weight, some by capability and so forth. The DoD in the U.S. has five groups of UAS they consider.

These are fairly broad groupings, but at least you aren’t stuck with a single craft per group. Being that there are multiple craft per group, we’ll pick and choose a few favorites for our little list today. Please forgive us, this will not be your full guide to all things military craft, we just want to give you a taste of the machines our governments are flying over our heads. I know we promised a palm-sized craft, but we’ll start with the Wasp instead. The first versions of this craft weighed in at just under 1 lb, one version for land, the other for water. The upgraded unit weighs a little over 2 lbs, but can land on water or ground.

This folding drone packs camera sensors under a 29-inch wingspan. Soldiers can pack this machine into a backpack, then get 45 minutes of flight at up to 40 mph for basic reconnaissance and surveillance needs. I met up with Insitu at SOAR Oregon in August 2017. They were showing off their collaboration with Fire What? in order to put real-time fire maps into the hands of forest fire fighters on the ground. Their high flying ScanEagle is small enough to soar high out of the way of firefighting efforts. Not too small though, it’s large enough to withstand the winds present at upwards of 20,000 feet. ScanEagle is a 40 lb drone able to fly up to 92 mph.

The neat thing about the ScanEagle is that you do not need an airstrip. The craft does not have landing gear. Instead, it takes-off out of a launcher, which extends into a retrieval system. The end of each wing has a hook, that hook catches the cable held up by the extended launcher. The drone never has to touch the ground. 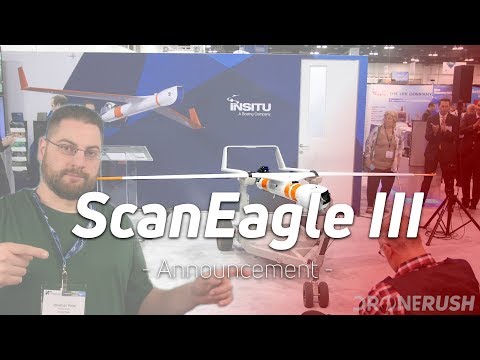 We had a front row seat to the announcement of the brand new Insitu ScanEagle III at AUVSI Xponential 2018 in Denver. I want to be as clear as they were, the ScanEagle III was built specifically for commercial operations, not military, but it will serve for the military as well. Long flight times and solid payloads make for a solid machine for surveillance and more. Using the same basic design as the ScanEagle, the Blackjack is nearly double the size in dimension and almost exactly double the weight. Flight capabilities are near identical, with the main exception being the payload. Service persons can load nearly 55 lbs of cameras and other gear onto the Blackjack.

The launcher and cable retrieval system is proving popular with an estimated 545 Blackjacks alone in service around the globe in 2017. The modern military drone is not so modern, as it turns out. Most of these machines have been around for a while, with early unmanned craft dating back to WWI – that said, the earliest service flight records I could find date back to the Korean War. The AAI RQ-7 Shadow is not that old, with its first flight in 1991.

Clocking in at 375 lbs, and an optional 14 or 22-foot wingspan, the 127 mph top speed machine can soar for six or nine hours, depending on the wings. I think this is one of the more recognizable smaller military drones, with the V-shaped tail.

You can get a toy version of this drone. Made of balsa wood, the hobby model is 79-inches and comes in several packages. While you can get just the RQ-7 Shadow frame kit for $169, we’ll recommend the frame kit plus main power plant for $146. At the top is everything you need to make the model fly for $360. You know this drone. At least I assume you do. The Predator has been the military drone of choice for the entertainment industry, you’ve seen the war movies or TV shows with military drones, they use this one.

Update, March 2018: The US military is retiring this drone. Newer and more powerful machines are pumping out, the MQ-1 Predator will stop flying soon.

You can put a collector’s edition 1/32 scale model on your desk, the hand crafted MQ-1 Predator is $117. If a little predator is good, a big predator must be better. Expanding on the initial Predator, the Predator B, more commonly called the Reaper, inverts the V of the tail to point up like a normal plane, but maintains the same general design.

Reconnaissance may be in its blood, but seven mount points for armaments tells me that this is a war machine.

The Predator drone platform is popular in the media and in hobby craft, check out the MQ-9 Reaper foam RC airplane for $110.

Of all the military drones, this one may be my favorite. Not because NASA has one flying around, more because this is just a big airplane that has no seats. Actually, I just like the look of it, personal taste.

The SR-71 Blackbird is one of my all-time favorite airplanes. It typically flew at very high altitudes over enemy territory on surveillance missions. The Blackbird could fly higher and faster than the Global Hawk; Actually, the Blackbird would be considered as going almost dangerously slow at 391 mph, otherwise, the Global Hawk performs many of the same duties. As I’ve mentioned, there are many drones in use around the globe by the military. Small machines like the Snipe are fairly simple craft, high-quality electronics in a toy-class drone. The big aircraft are certainly another topic.

Some of these machines you can get your hands on. We’ll explore them in a future update to this post, for today, especially for Veterans/Remembrance Day, I simply wanted to share the info about some interesting machines in use.

What is your favorite military drone?

Looking for a drone you can fly at home?

Can I actually buy a military drone?

Maybe. It is most likely that your government prohibits the sale of military equipment to civilians, which is why there are machines like the ScanEagle III, which is capable of military operations, but are not officially military craft. If you can get a machine home, keep in mind that it will need to be less than 55lbs total take-off weight, which rules out most military craft, and that there are strict laws against affixing “weapons” to a drone. You might be better off figuring out how to build a more simplified custom drone for your needs.

How will military drones change the air force?

There is one huge advantage to drones over manned aircraft, the risk of life. However, any pilot will tell you that the situational awareness you feel in the cockpit is near impossible to replicate in a ground control station. Drones will continue to prove superior for more basic tasks, such as reconnaissance missions, and drones can make for amazing support ‘drones’ for a manned craft, but more delicate flight needs will remain human piloted for a while yet.

Technically speaking, autonomous flight with object detection is easy, infrared cameras can ensure that object is not just a tree stump, and arming a drone is a simple matter of having enough power to lift the weight of your payload. Yes, drones can be fairly easily weaponized. However, I’m not worried about this threat – large military aircraft with some autonomy is another story, but the cost is too prohibitive to be worth it on a smaller scale. To build an autonomous drone with any appreciable range, a full array of obstacle avoidance sensors, an infrared camera and then enough weaponry to cause a human harm, you’re looking at at least $5,000 worth of parts, labor, and R&D time to get it operating. Is that worth it when firearm ammunition costs pennies? (That’s as deep as we want to go on this subject, we know there is more to it.)

How many different military drones are there?

As you can imagine, the exact answer to this question is protected. Most militaries do not advertise their fleet. However, the last issue of a military fleet book I was able to look at, but not officially report on, had at least 1,200 different aircraft. Most of those listings were different iterations of the same product, or different brands making basically the same product, so I’d comfortably say that there are over 300 different general styles of unmanned aircraft in use by militaries around the globe, and the vast majority are for surveillance.