The drone apps you need to fly – from the manufacturer

The drone apps you need to fly – from the manufacturer Most drone manufacturers have opted for proprietary software to control their respective drones, we’ll explore that today, a contrast to our Best drone apps list, with the best apps for any drone enthusiast. Those were the generic apps independent of drone manufacturer, this list today is the apps you need to fly a drone from each of the major manufacturers.

We chose some of the more popular drone manufacturers out there, including DJI, Autel Robotics, Yuneec and Hubsan. Please feel free to let us know in the comments below if there is a manufacturer you’d like to see in the list.

We’d hate to be presumptuous about the drone you are flying, but unless it’s a custom racing rig, there’s a high likelihood you’re flying a DJI drone today. Let’s start there. For those flying later DJI hardware, look no further, this app is for you. Designed for all Phantom 4 series drones, the Inspire 2 and everyone’s favorite, the Mavic Pro, DJI GO 4 packs the very latest and best features that DJI has to offer in retail drones.

This is also the app you’re going to want on hand to operate your new DJI Goggles with your Mavic Pro. And if you do not this app for some reason, why not check out our list of DJI GO 4 app alternatives.

DJI GO 4 is free in the Google Play store or the Apple App store.

Designed for the DJI Mavic Mini and DJI Mavic Air 2 The focus with the new DJI Mavic Mini is a simplified flight experience that doesn’t skimp on the core functionality, this described the DJI Fly app as well. Experienced DJI pilots may not find all of the manual tweaks and settings they’ve gotten use to for the larger drones, but the truth is, they were not necessary for flight. Focusing on the live view from the drone, and key mapping and navigation telemetry, the DJI Fly app won’t confuse new pilots, and, just like the drone, is a great stepping stone toward more advanced flight.

Check out DJI Fly for Android or iOS.

Check out the DJI Mavic Mini and Mavic Air 2: For all of you early adopters, the ones that took to the sky with a quadcopter from the Phantom 3 series or earlier, this is the app for you. Packing all but the very latest of features, and supporting all but the latest drones, DJI GO is the app for your Inspire 1, Phantom 3 or older, Matrice 100, Matrice 600 or the Osmo series of handheld gimbals.

DJI GO is free in the Google Play store or the Apple App store. 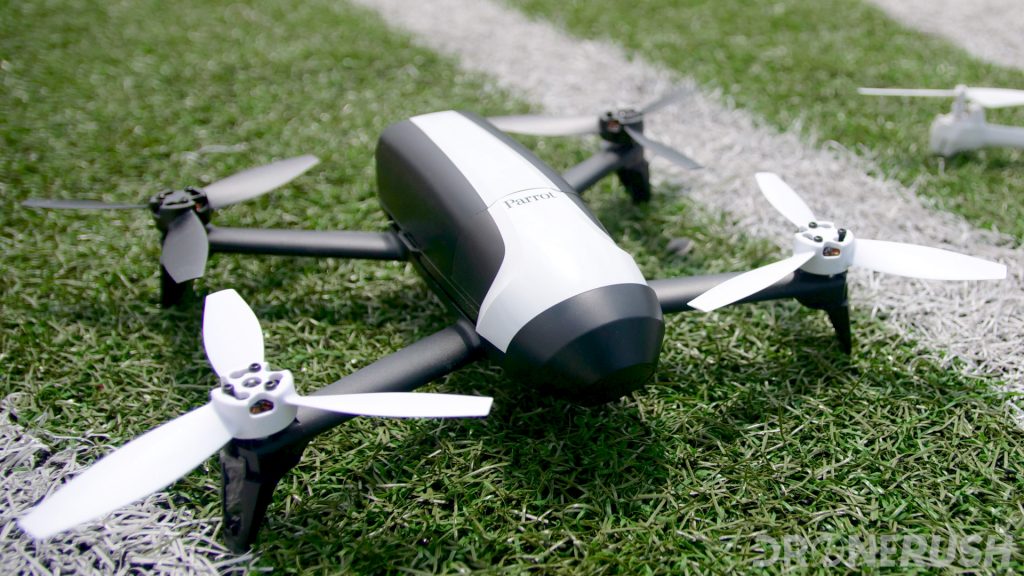 With growing popularity, Parrot drones are proving not only entertaining, but functional as well. Mostly built for the Bebop 2, Parrot FreeFlight Pro is the base up to get you airborne. Look for in-app purchases to unlock additional flight features. Yuneec has more than a few great flying machines on the market today. If you are taking to the sky with the smallest craft in their line-up, Yuneec Breeze Cam will help you get the most from your Yuneec Breeze 4K drone. For the larger machine aficionados in the Yuneec stables, you’ll want the CGO3 or CGO4 app to fly your Typhoon H and other machines equipped with the CGO3 camera. Obviously, for those with the Tornado H920 and up, with the CGO4 camera, grab the CGO4 app. I like how simple Yuneec kept that to understand.

Yuneec CGO3 is free in the Google Play Store or the Apple App Store. 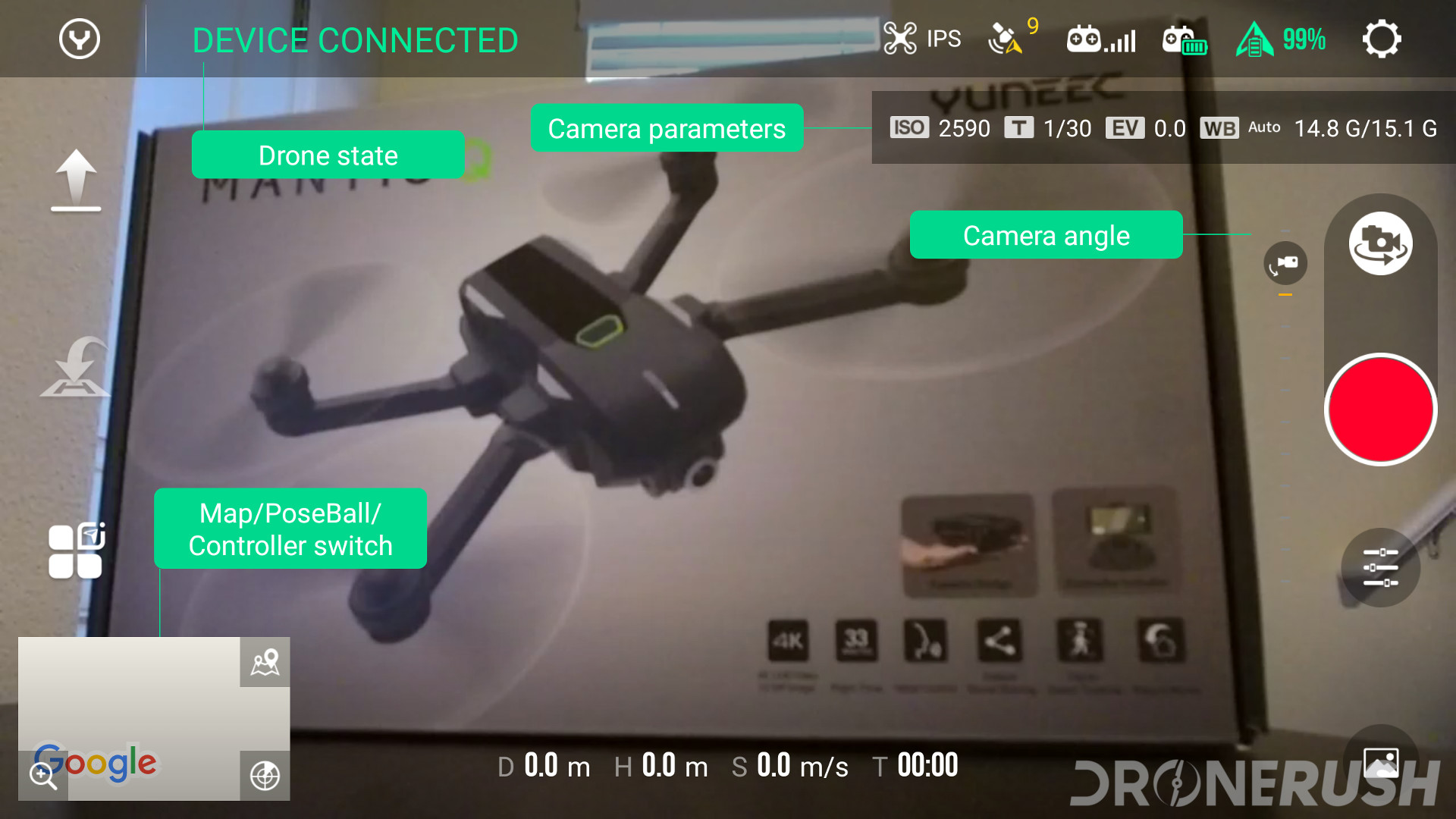 Released alongside the Yuneec Mantis Q in mid 2018, Yuneec Pilot is a familiar looking app that provides all of the settings and controls you need to get the most out of your folding drone. We’ve haven’t stress tested the app yet, but after a few short flights with the Mantis Q, we’re impressed. Just a solid and simple app experience to fly the new Yuneec drone.

Yuneec Pilot is free in the Google Play Store or the Apple App Store. As far as we’re concerned, Hubsan is pretty much king of the toy class drone, but they have some serious machines as well. These more capable fliers require a little more than a small toy remote, and Hubsan has embraced the mobile device to make it all happen. For machines like the X4 H501A, X4 H501S Brushless and the H109S X4 Pro, look no further than the X-Hubsan app.

X_Hubsan is free in the Google Play Store or the Apple App Store. At this stage in the game, the Autel Robotics X-Star Premium is the only drone up for sale from the robotics company. At least for normal retail sale. While major flight controls are handled by the supplied remote control, the Starlink app brings FPV video to your hands while in the sky.

Autel Robotics Starlink is free in the Google Play Store or the Apple App Store. Yes, the name of the drone is the same as the name of the app to control it. The 3DR Solo is an older drone that has been discontinued, you can still find it new and it is a big, fun drone to fly. Although, you’ll need the older GoPro 4 if you want a camera, and the gimbal may well cost more than the drone itself at this point. Anyhow, 3DR Solo is the app you’ll want to fly your 3DR Solo.

3DR Solo is free in the Google Play store and in the Apple App Store. PowerVision has been a leader in underwater drones, while they’ve had a few flying machines, the PowerEgg X marks a point where they can compete in the consumer market. To run this transforming drone, you’ll want to download the Vision+2 app for Android or iOS. It has a look and feel similar to most out there right now, including DJI GO. Vision+2 allows you to control your PowerDolphin or PowerEgg X, and in camcorder or drone mode.

PowerVision Vision+2 is a direct download for Android, or grab it from the Apple App Store. Matching the technique of the best players on the market, GDU offers full flight control of the GDU Byrd series from the provided remote, but add in extra camera controls and an FPV stream using the GDU Pro app.

GDU Pro is free in the Google Play Store or the Apple App Store.

We know we already have a full list of the best apps for every drone pilot to take a look at, but we can’t put together a list of drone apps without mentioning one or two that will help you fly legally. That’s all there is to it, we don’t want you to get in trouble, please consult the FAA’s B4UFly app, or the similarly powerful Airmap to make sure your flight plan is safe and legal.

B4UFly is free in the Google Play Store or Apple App Store. From pre-flight airspace analysis through your drone flight and safely back to the ground, the folks at Airmap have a powerful tool for you. For the most part, Airmap is what the name implies, a mapping program for your drone flight, behind the scenes, Airmap offers difference services for different levels and stages of our flight, including integration with drone insurance.

For our hobby and basic commercial flights, we fire up Airmap first, it is an extensive airspace map that helps us decide where we can fly. If that flight area is in restricted airspace, Airmap has integration with LAANC, providing you with FAA authorization to put your drone into the sky. Just indicate your desired flight area and altitude, answer a few questions about your craft and the purpose of the flight and let Airmap handle the request with the FAA.

Once you are in a registered flight within Airmap, it is able to show you a real-time map view of all ADS-B and other reported aircraft in the area. Flight safety and airspace situational awareness are key to a successful flight, Airmap has got your back.

That’s all we have for today. Please note that whatever brand of drone you purchase, there is probably a companion app to help you get more from the flight, or to outright control the craft. Please consult your manufacturer’s website and documentation for details. Of course, drop us a comment below and we’re happy to look up and add your required app to this list.

Fly safe out there, and be sure to check out the available apps for your drone to get the most from the experience.

Looking for another drone?

Do I have to use manufacturer apps to fly my drone?

No, however, there may be very few alternatives available. If your manufacturer has exposed an API or SDK to allow third-party software to control your drone, then you’re in business. Most manufacturers involved with the Dronecode and PX4 systems are included here, as are DJI drones. We’ve got a full list of DJI GO 4 app alternatives, if that’s what you’re looking for.

Do I have to use an app to fly a drone?

Some drones require an app, but most can be controlled with just the remote control. The trade-off is a lack of fancy flight features. For example, you can fly your DJI Mavic Air 2 with just the remote, capture photos and video, engage RTH and more, but you will need an app on a connected mobile device to enable Quickshot flight modes or swap to panoramic photos. Don’t forget that your live view from your camera is also locked into the app for most drones.

Should I pay for those expensive drone apps?

Please consider your needs before you spend money on alternative apps. Most are worth it, but only if you need the features they provide. For example, Pix4D is out of the price range of many hobby pilots, but the advanced mapping features they provide are crucial to some commercial operations.