If you are like us, you would love to get your hands on a drone from Intel. They’ve got some serious inspection and passenger hardware on the go, but they’ve also got a couple iterations of entertainment drone as well. We had the chance to attend a presentation from them, exploring the Intel Shooting Star drone.

We’ve seen this drone on the site here before, but this time we got to ask a few more questions. We’ve got a new perspective on Intel’s entertainment business, but, sadly, we still won’t be flying a Shooting Star drone at home any time soon.

I invite you to listen through our recording from the event. We had tried to capture video of the presentation, but it’s just not in the cards this time. Don’t worry, there was only one Shooting Star drone at this event, and it never powered on, you are only missing the view of the presenters, and a few videos that you can find on Intel’s YouTube channel anyway. As we teased last week, this was the Girls Who Drone event, hosted by Sally French – The Drone Girl – and Samsung NEXT in San Francisco. We had been expecting Natalie Cheung to present on behalf of Intel, but she is still at the Olympics. No worries, Cindy Ng entertained and provided tons of information on the drones and business.

After my little intro, the recording picks up with Sally French welcoming us, then works quickly over to Cindy from Intel. Let’s give it a listen.

As I’m sure you are gathering from the recording, we were presented with a simple presentation. Instead of bombarding us with slides and videos, Cindy spent most of her time answering our questions.

Our main takeaways include the fact that we will not be able to buy these drones at home. Intel is running a business here, considering what they are accomplishing thus far, we’ll leave it in their capable hands. For now. The concept of replacing fireworks with drones brings mixed feelings for me. The idea of near pollution-free lights in the sky, with minimal noise, is smart, but, maybe it’s just me, I like the bang and noise of traditional fireworks. Considering how many places fireworks are not allowed, we are excited to see light shows take place.

Flight rules are fairly strict still, we’re glad to see Intel leading the way to allowing more and more flight options. As it sits, you and I at home have to be one drone per pilot and not fly at night, Intel is not flying over people, but certainly proving that swarms and night flight are possible to do safely.

Earlier this year, Intel launched a new Shooting Star Mini drone. I always thought fireworks indoors were silly, maybe a future concert or sporting event will have some flying entertainment. Last thing we’d like to mention, Intel targets up to 8 minute presentations. This allows a minute or two to fly the drones into place, and return them home safely after the lights turn off. Luckily, we now know that Intel can handle over 1000 drones simultaneously, so I see no reason why they couldn’t fly a few sets of drones to extend a performance.

We had a great time at the event, a huge thank you to Sally French, Siggy Hindrichs of Samsung and Cindy Ng of Intel for hosting and speaking at this great event. Girls Who Drone celebrates women in the tech space. We’re eager to see fewer and fewer obstacles for women and drones, as we’ve said before, these are fun tools and toys that we can all enjoy. 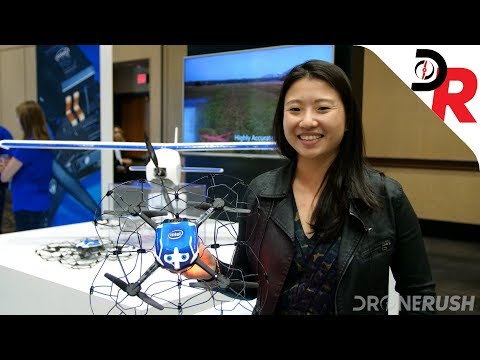