Electric helicopter, inspired by Tesla, takes to the skies

Electric helicopter, inspired by Tesla, takes to the skies Up until recently, electric aircraft have been mainly of the unmanned variety, but a desire for cleaner and quieter flight inspired a new electric helicopter. Placing a pilot inside this fairly normal looking helicopter, the Tesla Motors inspired all-electric build took flight, and there’s video to commemorate it.

Sirius satellite radio was not enough of an accomplishment for this cereal entrepreneur and inventor, Martine Rothblatt has a number of global success stories, but this one’s close to her heart. That was a bad pun, I’m sorry, this one is inspired as a better way to help deliver transplant organs for those in medical need, including Rothblatt’s own daughter.

Outlined last year, Rothblatt and Tier 1 Engineering have created a full electric helicopter, which flew in September, 2016 for about 5 minutes at around 400 feet AGL altitude, reaching speeds up to 80 knots. Not bad for its inaugural flight.

The basic difficulties you face with your hobby quadcopter are at play for this electric helicopter, packing in 1250 lbs of Lithium Polymer batteries results in a roughly 2500 lb helicopter. Just like your toy drone, you’re looking at about 20 minutes of flight time, or less. Despite this, the proof of concept was a success, it’s simply time to build better, lighter batteries.

By description, the project sounds like something any of us could do in our backyard, just buy a cheap helicopter, slap in a half ton of batteries and replace the combustion engine with a big motor. In this case, Brammo motorcycle batteries and a YASA electric motor. I suppose it doesn’t hurt that Rothblatt is a pilot herself, making the project a little more personal, a little more hands-on.

The following six minute video is a little on the uneventful side, at least for those that can’t appreciate that this is a historic flight of the first manned, all electric, full-sized helicopter. 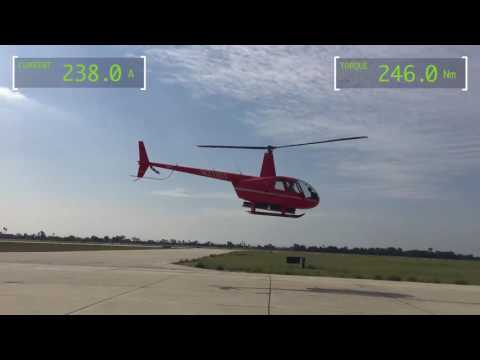 New electric helicopter test flight a success, the plan is to improve the design and reduce the overall battery weight, eventually creating a marketable blueprint that can be outsourced or licensed to more experienced aircraft manufacturers. As it sits, the helicopter project clocked in at under $1 million, which is pretty affordable for modern day transportation R&D.

What do you think, with an explosion of electric cars, bikes and trains, are planes and helicopters the best next move for electric transportation, or will the weight of batteries overcome the desire to take to the skies?