For months now the DJI Mavic Pro has been the drone to beat in the general consumer market. Other manufacturers have released their competing quadcopters, or accessories to add value to older drones, but now DJI has a fresh new machine on the market, the DJI Spark.

DJI Spark is a small drone, designed to appeal to the consumer that, perhaps, is not all that into drones. Making a selfie camera that can fly is a fun approach to the drone market. The ability to control the Spark entirely by hand gestures has definite curb-appeal as well, but can this new machine take on the Mavic Pro?

Pricing in at almost exactly half that of the larger, folding drone, this is our shootout of the DJI Spark vs the DJI Mavic Pro.

DJI is aiming for different markets with their latest drones. This is true beyond the two machines we’re looking at today, but you can check out some other DJI drones here to see what I mean. Currently, the Mavic Pro is the drone for drone lovers that want an easy to operate, compact and portable quadcopter. The Spark is for those looking for an easy to operate, compact and portable machine, but, perhaps are not actually looking for a drone.

We suspect that the DJI Spark will quickly take over as one of the more popular aircraft for first time drone owners. We have been heralding the DJI Mavic Pro as a superb machine for anyone, from beginner to pro, but it has been the first time drone choice for many up until now. On the surface of it all, the price tag difference between these two machines puts them into different segments of the market, but there is more differing than that. We’re not prepared to say that the Mavic Pro is twice as capable as the Spark, especially since the spec sheet says otherwise.

For sheer features, the DJI Spark offers the new DJI Quickshot autonomous flying modes. That’s a plus over the Mavic Pro for sure, at least for those not looking to fly the routes manually. On another level, the Spark offers three methods to control the drone – via mobile device, via remote control or by hand, literally. That’s one more option than the Mavic Pro.

There is no question, the ability to launch, operate and land the DJI Spark entirely by hand gestures is an impressive gimmick. I do not mean the word in a negative sense, it’s actually really cool. On the flip side, the Mavic Pro can be controlled by mobile device and by remote control. To a lesser degree, you can operate some autonomous flying modes and control the camera using the new DJI Goggles VR headset. Also very cool!

I hope you are seeing that the controls appeal to different people. But that’s just the beginning.

DJI Goggles review – a new view of your world The tie breaker in terms of portability is thanks to the hand gesture controls for the Spark. This assumes that you only want to take selfie photos, but, technically the Spark is the more operable machine for the size. Weight is another story, the Mavic Pro is heavier, no matter which way you look at it. I feel the folded Mavic Pro is easier to manage than the fixed-arm Spark, but that is certainly opinion. Your travel needs may change your feelings on this. One thing is for sure, the official DJI bags for each drone are nearly the same size. My point is that the Spark may be the smaller flying craft, but the two take up about the same amount of space in your luggage.

Ready to fly, the Mavic Pro is a substantially larger drone. Still quite small, mind you, but the Spark measures in impressively small. As may become a theme in this comparison, Spark is about half the size of the Mavic Pro. If you have no preconceptions on what drone size means when flying, trust me when I tell you that the Mavic Pro can handle a stronger wind before your video gets all wobbly. The Mavic Pro is also a faster flying machine, but not by much.

Where the two machines really differ is in the camera. As best we can tell, they have the same camera sensor, a 12 MP sensor capable of shooting 4K video. Except, the Spark does not shoot 4K video. The Mavic Pro has a 3-axis gimbal to keep your image steady, the Spark only has a 2-axis gimbal. Spark shoots just 1080p video, using the extra pixels from the 4K sensor for that third axis and stabilization. We are finding overall video stabilization to be more than acceptable on the two machines, it’s just that lack of 4K recording on the Spark that makes the difference.

DJI Phantom 4 Advanced announced – it’s all about the camera I don’t know about you, but the most important thing to me when it comes to flying a drone is the quality of the connectivity between craft and controller. Next to that is the ability for the drone to act like its supposed to.

In both these cases the Mavic Pro is the clear winner over the Spark.

DJI had to shrink and cramp together many of the components in the Spark, which, I hate to admit, has been causing some grief. Maybe it’s just my Spark (two actually, I had to return the first one for a fault,) it is very sensitive to magnetic interference from the earth. My first flight with the returned Spark was in the exact same place I fly my Mavic Pro all the time, right in the back yard. I won’t talk about the faulty Spark, but the replacement obtains a weaker satellite connection than the Mavic Pro. I usually launch from about 20 feet from the metal roofed house, I’ll be sure to take a few more steps away when flying the Spark, just in case.

In the United States, as with many countries, we have to keep our drones within line of site when flying. To that end, it should be no problem using the WiFi connectivity of the Spark. While capable of getting about a mile away from the remote control, the limitations when flying via mobile device or with hand gestures is significantly less.

The biggest thing, and I have yet to figure out why, the connection between drone and remote is not what I have come to expect using the Mavic Pro. I have never lost connection between drone and remote with the Mavic Pro, even if standing under that metal roof I talked about. If I get too close to the house, however, the magnetic interference kicks in and the Spark drops into a safe hover until I get the remote back into connectivity range.

Don’t be scared off of the Spark. No doubt the Mavic Pro is the better connected device, but the Spark is still quite good. For me, this is what matters, the quality of photo and video capture make or break drones of this caliber. Not ignoring that the price is different and the intended image capture is no the same, but still, both are all but designed for imaging purposes, I only ask that they do a good job.

I think so. Expectations in check, there are far superior camera drones out there, there are many smartphones with better image capture as well. Knowing this, I am still very impressed with both drones. Low light is not their strong point, they are put through some of the harshest lighting conditions around, and yet I find most images serviceable.

Here is an older DJI Mavic Pro ND Filter test I put together. I intentionally put in the worst and most difficult lighting situations I had in my inventory – point is, this is not a pretty video, it’s a real world ‘your Mavic video could look like this’ example. 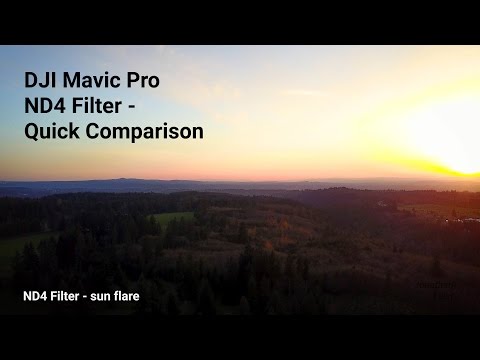 The DJI Spark is designed, for all intents, as a selfie camera that flies. In fact, this is your only option if flying by hand, the camera must keep a lock on your face, else it initiates a landing.

The Mavic Pro is the compact machine semi-pro pilots use to capture amazing aerial footage. You can use it as a selfie camera, sure, but it focuses much better on distant objects than anything.

I could talk about this for a long time. We could discuss the differences on a granular level, but let’s not. As previously mentioned, I think both of these drones have the same image sensor. They both capture 12 MP photos. The difference is that the Mavic Pro captures 4K video, while the Spark limits to 1080p.

To that end, let’s let the drones do the talking. Everyone loves a good table of specs. Here is your Mavic Pro vs Spark spec sheet comparison.

Final thoughts on the DJI Mavic Pro vs Spark Normally when I pit one drone against another I can decide on a winner. There is usually something that makes one drone a better value than another. In this case, despite my thoughts that the DJI Spark is a little over-priced, I think it is right on for the value.

I feel like the DJI Mavic Pro is twice the drone compared to the Spark. I know the spec sheet says otherwise, but this is an opinion. I feel like the limitations and some of the concerns I am trying to ignore from that first faulty Spark are holding back my enthusiasm. Please consider that as you read my thoughts. I am biased toward the Mavic Pro, it’s been my companion these past months, we’ve been through a lot together. The only issues I have with the Mavic Pro are ones that I also have about the Spark, namely, the Android app is less reliable than I’d like.

By my math, we have a stalemate. Spark is half the price and, in my books, half the drone, but it’s also, I say again, half the price. That makes the two drones of equal value for the dollar.

If you are looking to get into drones, or are otherwise not interested in a higher-end machine, the DJI Spark is a fantastic option. Compact, easy to fly and it captures quality images, is that not the point, after all? You can grab the DJI Spark for $499 as just the drone, but we highly recommend grabbing the Fly More combo for $699. The combo includes the remote control and another battery, plus some other stuff. (We’ve seen deals for as low as $229 without remote, $549 for the Fly More combo.)

The DJI Mavic Pro is a very capable machine. Reach new heights, new distances and remain in the air for much longer while recording full 4K video. An excellent drone for beginners and experienced pilots alike. You can grab the DJI Mavic Pro for $999 as the drone itself, bump that up to $1299 for the Fly More bundle. In this case, you get the controller with the base unit, you get two extra batteries, a charging hub and more in the bundle. Also worth the price to upgrade. (New pricing and deals have put the Mavic Pro as low as $819 alone, $1142 in the combo.)

What really matters, in the end, is what you think, how do the DJI Spark and DJI Mavic Pro compare in your books?