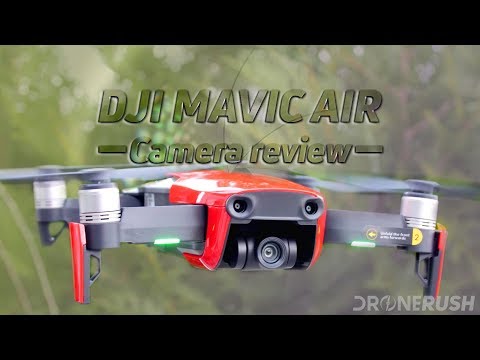 Enjoy our review of the camera and features of the new DJI Mavic Air. I’m sure you’ve heard this already, DJI took the best of the Spark and Mavic Pro, mashed them together, improved them a little and added a few extras, resulting in the Mavic Air. This new drone belongs in between the two, for many reasons, but when it comes to portability and the camera, it’s a notch above.

From the spec sheet to the air, the camera on the Mavic Air is superior to the Spark and Mavic Pro. This is due, almost entirely, to software. The same 1/2.3-inch, 12 MP sensor is in all three drones, but the Mavic Air rocks 100Mbps data rate. You’ll hear me say this again as we go, the result of that data rate is significant. Continuing to look at the specs, the camera captures light through a 24 mm f/2.8 lens with a 85 degree field of view. It is an auto-focusing lens with a minimum focal length of 0.5 m.

Still images are shot at either 4:3 aspect ratio at 4056 x 3040 or the 16:9 aspect ratio for 4056 x 2280 pixels of resolution. You get the smattering of shooting modes, such as burst shooting and an interval setting. The best addition to the Mavic Air for still images is HDR. We can’t say enough about needing HDR for aerial shots with a sunny sky and the ground both in view. Keeping that camera in place, and stable, is a 3-axis gimbal. You can control it using a wheel on the remote control, and a scroll bar in the app, from 0 to -90 degrees – straight forward to straight down. On its own, however, it will stabilize your image from 22 to -100 degrees tilt, 30 degrees either way rolling and 12 degrees wither way panning (side to side.)

Image stabilization works great when the drone is hovering or moving at low speeds. If you were expecting a ton of degradation at higher speeds, you’d be wrong, we’re seeing very stable video at speeds up to 20 mph. We’ll talk about the drone’s capabilities in the full review, but for now, you should expect stable video capture up to about 22 mph. Or while hovering in 22 mph winds. We need to credit the drone instead of the camera for including several great flight modes, but the camera helps make everything happen. In addition to the smattering of typical DJI flight modes, including Active Track ‘follow-me’ modes, the Mavic Air steals the Quickshot and hand gesture flight modes from the Spark.

The Mavic Air doesn’t just take the features from the Spark and Mavic Pro, it also adds more. Of note, the new Asteroid and Boomerang Quickshot modes and the new capabilities in Hand Gesture flight.

The important thing to point out is that the Mavic Air is able to better handle the features as well. Speaking of hand gesture flight, the Mavic Air is way more responsive than the Spark, and safer. The Mavic Air is equipped with rear facing obstacle avoidance sensors. These are crucial for using the drone indoors or around people.

Is it worth it? Enough with the specs, let’s talk about our feelings. In terms of the camera on the DJI Mavic Air, my feeling is ‘happy.’ I admit that my first reaction to the new drone (before I got to touch it myself,) was skeptically reserved. My reasoning was simple: “it’s the same camera sensor, it can’t actually be any better, can it?”

Well, I am very pleased to say that I was wrong in assuming mediocre results. I still would have loved to see a larger sensor, but DJI has proven that the sensor was not a problem. I should have known this from the results of Google’s software tricks on the latest Pixel phones, more can be done internally to compensate for the limited sensor size.

I want to say something very important now, give me a second to load up an Editor’s Tip box:

DJI Mavic Air and DJI Mavic Pro are not the same thing!

What I mean to say here is that the camera on these two drones may have the same sensor on the inside, and the Air may produce better images, but there is more to consider. I speak of usability. With the DJI Mavic Pro, you have access to a slew of settings for controlling the camera. Looking at the remote control alone, the Mavic Pro has a wheel to control exposure. The Mavic Air is mostly automatic. This makes the Mavic Air much easier to get great shots in general, but if the auto settings are not ideal for your shot, you’re a little out of luck. 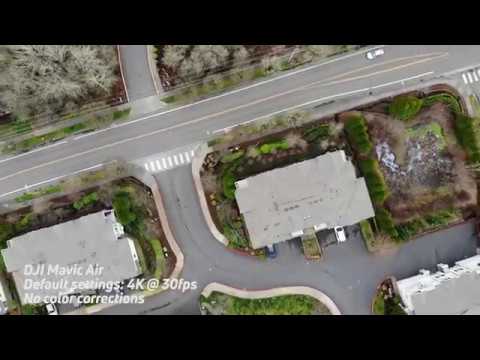 In the end, in considering nothing more than the camera output from the new DJI Mavic Air, we think it is well worth the purchase. There are, without a doubt, better cameras on drones out there. DJI themselves offer more than a few higher-end machines with some of the very best cameras around – not just for drones, I mean the very best around!

Smooth 4K video recording is the current standard for top notch video production. The Mavic Air delivers. 12 MP photos are high enough resolution to print quality posters, Mavic Air delivers again. So, what is that ability worth to you?

The Mavic Air takes better images than the average smartphone, and is cheaper than a flagship phone, plus it flies. A DSLR that shoots 4K costs more than the Mavic Air. I’ll just stop there, you get the idea, this drone is good, but you have options, especially if you don’t need to fly. That said, if you do want that camera in the sky, you may have just found your machine. Stay tuned for our full review of the DJI Mavic Air. From what you’ve seen so far, is this the drone for you?