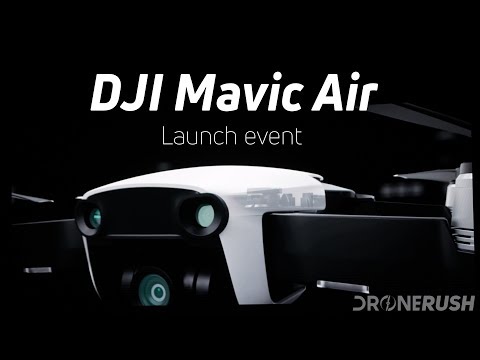 At a press event in New York city, a new drone is announced. Promoted and teased under the banner ‘Adventure Unfolds,’ this is the new DJI Mavic Air.

As the rumors had suggested, this is a folding quadcopter. It’s a little smaller than the Mavic Pro, still larger than the Spark, but perhaps better than them both. Let’s take a look. We were on hand in New York to enjoy the event, there was a stage show, then we got to go hands-on with the drone. We’ll explore the hands-on experience a little later, for now, we’ll focus on the event and the drone itself. The new DJI Mavic Air continues DJI’s philosophy of creating portable drones. The propeller arms fold in, the propellers are quick release and the entire package keeps small and easy to transport. The propellers do not tuck away entirely, nor do they fold themselves, so some care will still be required to travel.

Mavic Air is equipped with the best visioning systems and safety as the Mavic Pro, just with more of it. In addition to forward and downward obstacle avoidance sensors, Mavic Air will not back into anything either. That’s 7 total sensors for your flight safety.

Speaking of sensors, how about a 12MP camera sensor. It’s still a 1/2.3-inch module on the inside, but the added processing and software mean you can shoot 4K video at up to 30fps at 100Mbps. That’s up from the 60 Mbps of the Mavic Pro. This is a F2.8 sensor. The Mavic Air captures a nifty 32MP panoramic image as well, including a new Asteroid mode that looks like a version of a 360 camera shot. Slow motion can be had at 1080p resolution and 120 fps.

Compensating for the difficult technical images in the air, the Mavic Air has HDR image capture. No better way to balance the bright of the sky and the dark of the ground. Photos can be stored internally on the drone with the built-in 8GB of storage. We still recommend using a microSD card, but at least you have options. Get those images off by connecting to the USB Type-C port, an update from micro USB of the past. Borrowing from the DJI Spark, you’ll be able to enjoy flight control via hand gestures. This is an exciting way to control a drone, if limiting – it’s only really good for taking selfies. We had wanted to see the addition of hand gesture control from behind the drone, so you can use it for more than just selfies, maybe next time.

In terms of size, the Mavic Air is smaller than the Mavic Pro when unfurled, over an inch smaller diagonally. That doesn’t sound like much, but does mean a little reduced stability in the air. It’s still larger than the Spark, though, and has a 3-axis stabilized camera gimbal, so you’ll hardly notice while reviewing your footage. The Mavic Air is approximately half the size of the Mavic Pro, and 40% of the weight. This is where we’ll mention that it uses the same remote control. Well, not the exact same remote as the Mavic Pro and Spark, but the same size and form-factor again. Meaning your accessories should carry forward.

Ocusync is a powerful connectivity feature for the Mavic Pro, now for the Mavic line. We’re still trying to confirm that it was added into the Mavic Air, but all indications is that they did. If so, we applaud DJI for adding it to the Mavic Air. This means seamless wireless connectivity to the DJI Goggles, the ability to pair two remotes for training and much more. In a smart move, they put antennae in the landing gear, pointing toward you, instead of the sky. Look for range of about 2.5 miles with the remote, a few hundred feet when flying by mobile device and 19 feet while flying by hand.

Flight time measures in at a claimed 21 minutes. That’s about the total flight time we get out of the Mavic Pro, so we expect about 17 minutes in the air with the Mavic Air. You get a removable battery again, so swap in a new one to continue the adventure. Some quick flight specs include a top speed of 42.5 mph, wind resistance up to about 22 mph and the Mavic Air matches the Mavic Pro with a maximum service ceiling of 16404 feet above see level.

As we’ve seen in the Spark, you get Quickshot features, as well as hand gesture controls for the most responsive experience ever from DJI. Range is improved up to 19 feet for hand gesture flight.

Some new flight modes include:

Boomerang – flying just like a boomerang, Mavic Air flies around you, automatically captures a video and returns to you.

Smart capture – based on hand gestures, you can take off from the ground by hand, push the drone out to 19 feet and snap some shots before landing back on the ground, all by hand. DJI has included new flight algorithms and redundancy for the best possible environmental awareness and safety, they call it FlightAtonomy 2.0. A good start, but now there is APAS – Advanced Pilot Assistance System. Beyond obstacle avoidance, APAS is auto navigation as well, you fly the drone forward and it will make sure to avoid hitting things while plotting a new course to keep you moving. The new DJI Mavic Air will be available for pre-order starting today, shipping starts on January 28th, with same day in-store availability. You’re looking at $799 for the base machine, $999 for the Fly More combo with added batteries and other accessories.

Time to fly, are you grabbing the new DJI Mavic Air? 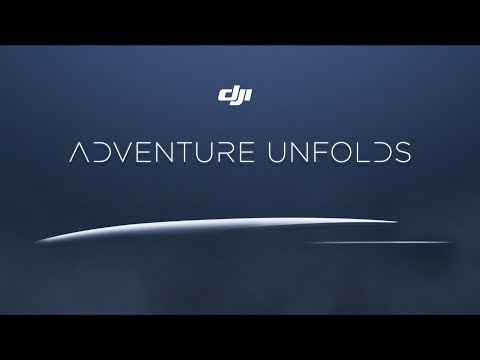