While the Mavic 2 Zoom is equipped with a 1/2.3-inch sensor, DJI pleased many fans by including a full 1-inch sensor on the DJI Mavic 2 Pro. A solid product made in partnership with Hasselblad.

Already know you want it?

Before we dig in First things first, we are about to explore the specific features of the DJI Mavic 2 Pro, including the different camera modes and capabilities. If you would like to learn more about the Mavic 2 platform as a whole, check out our Mavic 2 review.

Running down the spec sheet, folks like us are liking what we see in the DJI Mavic 2 Pro camera. The running standard for best camera drones is a 1-inch sensor, and the Mavic 2 Pro delivers. Not only this, but DJI isn’t just using any old sensor off the shelf, this camera was built in conjunction with Hasselblad. That partnership is paying off for us pilots.

Getting specific, the Mavic 2 Pro has a 1-inch CMOS sensor that shoots at 20MP with 4K video recording. The lens is a 28mm focal length with 77 degree field of view and variable f/2.8 – f/11 aperture. There are no real specific camera modes, just the ability to control the aperture on the fly, choose from full auto, full manual or a selection of modes in between. Aperture Priority mode is one of my favorites, allowing you to choose the depth of field while the camera keeps everything else in order. DJI Quickshot is on deck, including all the best previously available modes. This includes Asteroid, Rocket and more.

In addition, enjoy the all-direction obstacle avoidance while in the ActiveTrack follow-me mode.

The available modes tell more of the story than the hard specs. You can shoot in single shot mode, which is the default, or choose from HDR, Burst shot, AEB mode, which takes 3 or 5 bracket frames or there is Interval shooting at two up to sixty seconds.

All of the photo modes can be configured or tweaked through various settings, including, again, the ability to shoot in full auto, full manual or choose a mode in between, like aperture priority.

We’ve taken photos and videos from the Mavic 2 Pro while stationary on the ground, at hover and while actively flying. We are very pleased to say that the results of each are solid. We cannot rightly identify the difference between a photo take at flight vs when just hovering, for example. Perhaps the greatest improvement is the dampened mounting. The Mavic Pro was mounted simply from above, literally hanging the entire Gimbal and camera down from the drone. The Mavic 2 design has a mount point above the Gimbal as well, but another at the rear of the camera. The two points together nearly eliminate camera shake.

The camera Gimbal operates automatically and manual at the same time. By default, the camera will lock onto a point, if you tilt the drone, the Gimbal will tilt, pan and roll to keep the camera pointing at the object. You can use the dial on the remote to tilt the camera up and down, and you can touch the live-view display on your connect phone to pan side to side.

User controllable range is limited to -90 to 30 degrees tilt, that’s straight down to a little bit up. Pan limits are 75 degrees left or right. You cannot manually control the roll, that’s reserved for stabilization.

Tilt speed is rated at 120 degrees per second. Meaning it will take a full second to tilt from straight down to the 30 degrees upward. On that topic, you have some practice to do if you like the gimbal to stop at 0 degrees, straight forward. There is no auto stopping point when the gimbal tilts to 0 degrees, however, it does show you a small number to indicate when you’ve arrived. We had mixed feeling with how the Yuneec Mantis Q handled this, stopping when you get to zero.

In essence, you had to spin the dial on the remote twice to tilt the camera from all the way up to all the way down on the Mantis Q, but only once on the Mavic 2. I suppose “pro” in the Pro means you need to be a pro to operate it to its full potential.

Don’t forget that you can connect the Mavic 2 Pro to the DJI Goggles. Activate the head-tracking mode to pan and tilt the camera to your liking as well. A small word of warning: With this enhanced range of movement, your camera isn’t always going to be pointing straight forward. If you rely solely on FPV to navigate, you may find that forward isn’t always forward.

The Mavic 2 Pro, as well as the Zoom, come with 8GB of internal storage. This space is high-speed flash storage, able to record at the speeds needed to use the 100Mbps data rate of the video recording. You need higher-end microSD cards to get this speed.

I maintain an opinion I first expressed with the GDU O2 earlier this year: On-board storage is a life-saver if you’ve forgotten your microSD card at home, but can be a hassle on the back end. Like the O2, you must connect your Mavic 2 drone to your PC, then power it up to be able to pull your media.

Compared to the simple process of swapping sd cards, the process to remove files from the drone’s internal storage is a deterrent to me. Every time I change camera modes, I ensure that the Mavic 2 is still saving files to the microSD card. That’s just my workflow. 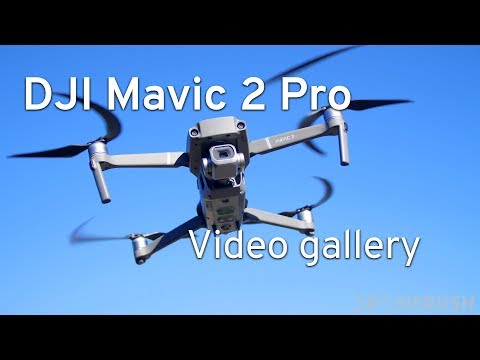 We’ve seen reports of DJI not using the full resolution of the 1-inch sensor when shooting 4K video. Speculation is that they had to reduce quality in order to reduce heat, that is a very compact little camera.

We have no way of knowing what, if any, limitations DJI has put on the Hasselblad camera. One leading theory is that the drone is only storing data from half of the lines of pixels on the sensor. This requires some explanation. The camera on the Mavic 2 Pro is a 20MP shooter. That’s a grid of 5472 pixels wide and 3648 pixels tall, if you go by the photo capture setting. 4K video is merely 3840 x 2160 pixels. This leaves two operation options, one is to capture the 4K video from within the middle of that 20MP range, as the Spark does. Or you can use the entire 20MP range and compress the final image down to the lower 4K pixel count.

Compressing the image down to 4K resolution involves combining or skipping groups of pixels. This may take 4 pixels in a square, averaging out the color values on them to output a single pixel. As that leading theory goes, however, the claim is that only every other line of pixels is being stored in the output. That would require pixel info to be duplicated to fill in the missing pixels.

What it boils down to, some feel the final video quality at 4K resolution is barely better, if at all better, than when you shoot 2.7K resolution. This may be a developing story, but for now, here is a comparison of 4K vs 2.7K output from the Mavic 2 Pro, you decide if there is a problem: 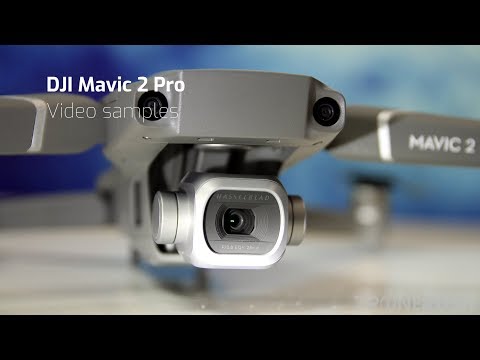 Are you asking me what the best overall drone is on the market today? At this moment, my answer is right here, the DJI Mavic 2 Pro.

Make no mistake, the DJI Mavic 2 platform, including the Mavic 2 Zoom and newer Mavic 2 Enterprise, is the real winner here. Depending on your camera needs, the Zoom is a more affordable device, well worth consideration, if you’re shopping. The Mavic 2 Pro is my choice over the Zoom for a few reasons. First, and foremost, the camera is better. They both shoot 4K video, but the Pro does it better, even if only a tad better. Just as important, 20MP still photos is a relatively huge jump from the 12MP still from the Zoom.

The Mavic 2 Pro with a zoom lens would be the ultimate weapon in compact, folding drones.

Make no mistake, the Mavic 2 Pro with a zoom lens would be the ultimate weapon in compact, folding drones, but we’ll take what we can get for now.

What it really boils down to, and we’ll save more explanation for a proper Pro vs Zoom comparison, how much post processing do you do? The DollyZoom feature in the Mavic 2 Zoom is very fun, but you can absolutely duplicate it in post with footage from any drone, including the Mavic 2 Pro. The Mavic 2 Pro is superior to the Zoom in terms of your post processing options.

When you are ready to purchase, the DJI Mavic 2 Pro launched with a price of $1449. A Fly More kit was made available to snag a couple more batteries, a bag and accessories for $319.