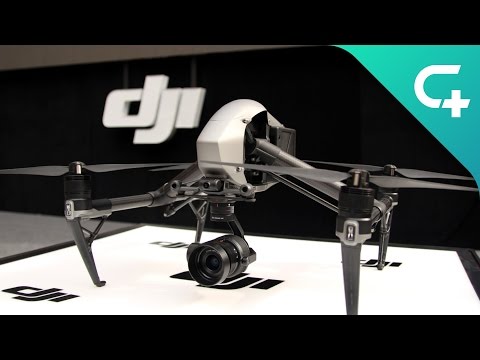 DJI recently held a press event in Los Angeles to introduce its two latest aerial drones, the Inspire 2 and the Phantom 4 Pro. Both of them are exciting new products for the popular drone maker, and we were able to form some hands-on impressions that we captured on video for the entire world to check out.

The spider-like Inspire 2 is an impressive, but also very expensive, piece of hardware. In chatting with Adam Lisberg, DJI’s Corporate Communications Director, we learned a lot about this drone, including how fast it can go (up to  58 miles per hour – recently updated from DJI) and how it can be operated by two people. One actually flies the drone and sees through a secondary camera, while the main camera (either an Zenmuse X4S or X5S) is controlled by a professional camera operator, so he or she can get those sweeping views from above without having to worry about the drone hitting anything. The DJI Inspire 2 costs a whopping  $3,000 for just the drone itself. If you want to spring for the high-end camera, you will pay at least an extra $3,000. Shipments are expected to begin in December.

The Phantom 4 Pro is definitely targeting a more “pro-sumer” crowd with its lower $1,499 price tag. We got to check out some of its more interesting improvements compared to the older Phantom 4, including its upgraded camera with a 20MP sensor, along with directional sensors on all four sides that will allow it to go anywhere with little fear of running into something. If you want to get this drone, you can; it’s on sale now and shipments begin next week.