Legal and Safety
By Jonathan FeistJanuary 18, 2020 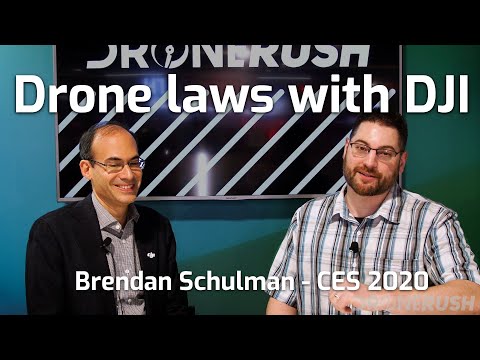 We have a fun tradition of chatting drones with Brendan Schulman at CES, and this year the discussion centered around remote ID. The FAA is working on implementing remote ID for all drones, we’re in the comment period, so you can share your opinions, and Brendan, on behalf of DJI, would like your help.

DJI has been working on remote ID for a long time, and the FAA is being forced to make a move fast, it’s interesting to see how things are rolling out.

If you haven’t watched the video above just yet, we have a fun and lengthy chat about remote ID, government edition drones, new drone pilot certification and more.

Remote ID is currently destined to require a drone and the controller to announce their locations. That will be announced as an ID number, not your personal info. The public may be able to capture that ID number and report it to law enforcement, but then law enforcement would be able to see who the owner of that drone is and their precise location. Think of this like a car license plate, where anyone can see the plate number, but only approved authorities can see the personal info behind that number.

Brendan makes a solid point in that the current FAA proposal will require some expensive hardware upgrades for each and every drone, even the $30 toys you might fly in your back yard. Alternatively, a simple Wi-Fi SSID type technology can be much more easily implemented, and already happening with most drones. DJI drones, of course, announce themselves over their connection frequency already, which is how their Aeroscope system is able to identify rogue drones in an area already. Being that DJI already has the tech in place to do everything that the FAA needs to accomplish, we totally understand that they’re not keen on legal changes that will require serious changes to their hardware.

Aside from remote ID, there are changes coming for licensing. Part 107 pilots are already using IACRA to register for testing, and enjoying new back-end features for their results, but hobby pilots will soon have to pass a knowledge test as well before they can fly. DJI implemented a short quiz within their app last year, Brendan thinks the new testing will be a little bit more significant.

The main takeaway from the entire interview is that you need to get involved. You could sit back and allow whatever regulation is coming to take hold, or you can share your constructive thoughts during comment periods for these proposed laws.

In addition, be sure to get involved on the NODE website, which will notify you of efforts you can take to affect laws in your area.

If you’d like to learn more, please check out our guide for new pilots. There are things you need to know and do before you fly your drone, we just want you to keep it safe and legal.