Advertising is an important part of our economy. Ignoring our fears of a future sky polluted by flying advertisements, it is still quite possible for blimps and other drones to put your message into the air. Scale is the key, we’ve certainly seen aerial advertising before, but how big can you get? I know what you’re thinking, a blimp is not a drone. I think we covered that it is, actually, in the sense that a blimp with no persons on-board is an unmanned aerial vehicle, the very definition of a drone, according to the FAA.

The typical drone we see around here is not an ideal tool to put a message into the sky. More than a few could handle the task, but not very gracefully. Traditional aerial advertising has seen the use of balloons, blimps and airplanes, but these all require a hefty investment and a trained pilot, not to mention cooperation from the weather.

We briefly met up with a company called Plimp at InterDrone. They have a 28 foot long unmanned blimp with a drone-style articulating propeller-driven flight system. A huge machine filled with Helium then driven by electricity. Thing is, the FAA says our machines have to be under 55 lbs to operate, they don’t exactly say how big the machine can be. At almost thirty feet long, Plimp weighs in at under fifty five pounds. Best of all, it has nearly 5 miles of effective line of sight, again conforming to FAA guidelines and making it very easy to fly a little further out.

Plimp offers a top speed of about 40 mph, battery life to push up to 20 miles and enough Helium to keep the drone airborne for a day or more. Aside from putting the Good Year Blimp out of business, I can think of many search and rescue or natural disaster applications for a drone like this. 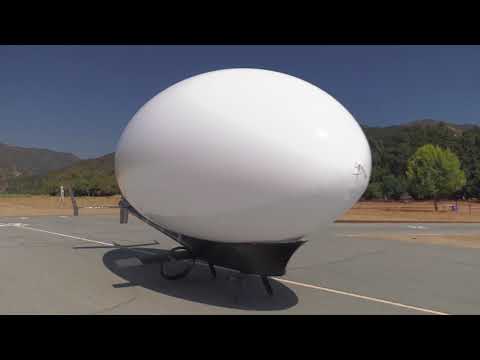 There may be resistance to this idea, but I think the UVify IFO program can be used for advertising, of sorts. One of my first ideas with these precision built light show drones was not for the entertainment business like advertised, I imagined emergency services flying them over an unexpected closed roadway, a real estate agent flying over top of an open house and other important, but simple uses such as those. If twenty of these machines can produce mock fireworks and other cool designs in the sky, surely they can act as an arrow or do not enter sign?

Update, May 2019: UVify has announced a brand new business with a modified drone. The new IFO-S uses the IFO platform, adds in a powerful computing system and the option for any cameras and sensors to fit your needs. We encountered a brand at Interdrone 2019 that had a high flying presence, eBlimp had a few sizes of blimps at the show, equipped with simple LED panels for some basic advertising needs. They offer several designs, from your basic white surface with logo on top, reverse logo with light on the inside of the drone, and a clear design with LED panels, all depending on your flight needs. eBlimp is a division of MicroFlight Inc, which has been advertising in the sky for over twenty years now — proving that drone advertising has been around for while.

Coming soon, but not too soon

As I’m sure you can imagine, machines like this may slowly roll out to car dealerships and sporting events as we go. Maybe you’ll see a Plimp over a farmer’s field as well, but as far as you and I flying in our backyard, may never happen.

Battery life and safety concerns are a huge deal. Plimp addresses these nicely, but it’s still the size of a moving van. Man power is also of concern. A car dealership can fly a tethered helium balloon with their logo on it all day long, no human interaction required. A drone requires a pilot at all times.

We attended AUVSI Xponential, a largely commercial and military drone focused convention. With nearly 700 autonomous vehicle manufacturers on the show floor, we did not see a single flying advertisement focused drone. Lots of the machines could be used for putting ads in the sky, but if this convention is an indicator of future drone usage, our skies should remain advertisement free for a bit longer.

Looking for a smaller drone?

Are drones good for advertising?

To be honest, your typical quadcopter drone is not an effective tool for flying advertisements. The first thing of concern is the low flight times. 30 minutes in the sky can shoot a ton of video footage, but the balloon you saw at the local car dealership will be up there all day or all week, maybe even more. The second concern is the airflow created by drones, which tends to create a cyclone and put hanging objects into a spin. A controlled slow spin of advertising materials sounds great, too bad we’re more talking about a chaotic and violent situation.

Finally, you can get permission to float an unattended balloon, but you need a Part 107 certified pilot on-site to oversee the entire operation from a drone. You can overcome the airflow issues, you can consider a tethered approach to overcome the power issues, but until the laws change, the pure economics of flying a drone for simple advertising purposes is prohibitive. Now, if you want to affix a smoke canister and do some sky-writing with a drone, that’s more feasible.

Why aren’t there more blimps up there advertising?

A simple answer, wind. Blimps have a huge surface area that is very difficult to make aerodynamic in all directions. The football shape of most blimps help them track straight in forward movement, but the sides are highly affected by winds. The shape helps point the blimp into the wind as well, which is the only way a blimp can hope to overcome the incoming air. The power-to-weight ratio of most electrical propulsion systems is just not there yet, your blimp will be overweight well before you can equip it so to get the kind of performance you can expect from even a simple quadcopter. Bottom line, if it is not a calm day, be ready to go on an adventure to collect your craft.