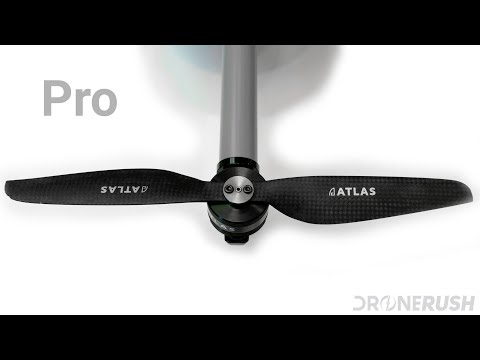 InterDrone 2017 continues to roll on, we next sat with the folks at Atlas Dynamics. The newly announced Atlas Pro is a unique drone, focused on the commercial market, but you might like one too.

The Atlas Pro is a three propeller system that is largely designed for autonomous operation. Manual flight is possible, of course, but that’s not the goal. Let’s dive in, this is our tour of the Atlas Pro with company CMO, Guy Cherni. Three propellers seems an odd thing, but it opens a segment of the market that many quadcopters cannot compete today, high speeds and long battery life.

I won’t leave you hanging, we’re talking speeds of 140 km/hr and flight time of nearly an hour. That is, the three five five setup: Three propellers, fifty five minutes of flight time and fifty KM in range.

Atlas Pro is built of carbon fiber. You’ll know it when you pick it up, it’s extremely sturdy and weighs far less than you’d expect. The propellers are also carbon fiber, Atlas Dynamics is not messing around with this thing!

My favorite part of this drone, it’s a simple thing, they have custom engineered a tilting rear propeller. That is, the two front arms sit as a quadcopter might, the rear propeller arm is centered. To combat the rotational forces of the spinning motors, as well as to help with steering, the rear propeller motor tips side to side. It tips a fair amount, actually, I really am impressed.

If it begins to rain a little, you need not worry, the Atlas Pro is IP52 rated. You won’t go swimming with it, but at least a little wind and water is not the end for your machine. When it comes time to pack things up, the front propeller arms fold in half. As it folds, the propeller is tucked in toward the fuselage. This is not an entirely compact drone, but there again, it was not designed to be, this is a commercial unit that focuses on functions aside from fitting in your backpack.

To that end, a full fledged unit, once the FAA expands flight capabilities in the U.S., will include the Nest. Nest is a motorized pod for the Atlas Pro. This is a larger pod, I’d expect to see it on top of a cart of it’s own, on a large vehicle, like a mail truck, or in the back of a pickup truck.

Mobility is the default thought process when we think drones, but the Atlas Pro and the Nest have something else in mind. Remember, autonomy is the goal. Place Nest in a permanent place on the grounds of your business or on the edge of your fields, then enjoy as the drone operates from the nest all on its own. Nest has a tray that slides out, the drone lands on it, then the tray retracts and the door closes. Batteries charge within. Big picture, you do not have to step in often to manage your drone, Nest handles the hard work.

Flight precision becomes key at this point. Sure, the drone proves resiliant in the air, but the multiple guidance systems on board give the drone landing precison within a few centimeters. A quick look at the landing tray of Nest shows the team is very confident in this ability. Are you a large retailer, or small retailer, looking to carry a new high-end commercial drone? Good, Atlas Dynamics would love to chat with you. I would like you to chat with them as well, just be sure to make this drone available for purchase to users like me.

Pricing is not something that Guy Cherni wanted to talk about. They’re still in the process of ramping up manufacturing and finding appropriate distribution channels. I’ll just say that there are currently more expensive drones on our Best commercial drones and Best camera drones lists. I dare say there are less capable machines on those lists as well, I think the bang-for-the-buck value of the Atlas Pro is looking pretty good. The drone itself is ready to rock, the Nest autonomous management system is a year away. Be sure to stay tuned for more info on this commercial drone that one might consider for some rare personal projects. I certainly see the value for farmers.

Let’s talk propeller count, is three props enough for you, or do you prefer four, six or more propellers for your operations?

Stick around for a little more from InterDrone 2017, we’re getting close to wrapping up our coverage.