Legal and Safety
By Jonathan FeistSeptember 12, 2018 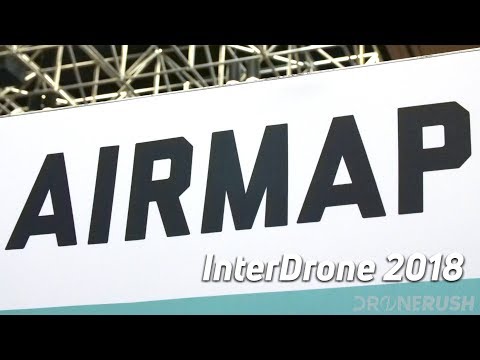 We have been covering drones for a while now, and we’ve been avid users of the AirMap app for our pre-flight discovery for most of that time. The funny thing is, we felt as though we were seeing the app for the very first time when we sat with AirMap at InterDrone 2018.

A huge thank you to Rocky and to Jillian for taking the time to educate and share all of the great features that AirMap has had, and now has to offer.

First, let’s discuss what’s new. At InterDrone 2018, AirMap announced their new SDK for developers. Not just that, this is their contribution and collaboration with the open source DroneCode community. They also introduced insurance, easily accessible through the app, it is provided by droneinsurance.com. The open source SDK integrates with the QGroundControl platform to easily put airspace information and UTM services into the hands of developers. The result will make it much easier for the open source community to use AirMap’s safety, compliance and airspace authorization tools in their projects.

I’ll leave the introduction at that, but allow me to express that this cooperation with the DroneCode community is a great thing. Integration with one groundstation is also not the extend of what we’ll see moving forward. AirMap is positioning themselves as a leader in flight tools for pilots and drone operations, be sure you’ll see more as time goes on. AirMap can now also help you with insurance. This may be the bigger news for the average pilot out there. DroneInsurance.com, provided by REIN, is now integrated into the AirMap app. When you are registering a flight you can now add insurance. There are many options for the insurance, and you are covered world-wide. Please note, only U.S. based pilots can apply for the insurance.

As a feature request for those of you with other insurance already in place, we’ve asked AirMap to add a portal to add that info. AirMap really is becoming a single tool that can handle many of a pilot’s needs, having insurance built in, or just allowing us to log our other provider is an important step forward.

AirMap is so much more than I’ve ever given it credit for. I promote it time and again as a discover tool, as it is the first app I open when planning a flight, and often the last app I close before taking that flight. Of course, AirMap can control many DJI drones, so I don’t even need to close the app to fly.

I may have only promoted AirMap for pre-flight airspace identification, but now, with insurance, you can do everything from plan a flight, get it authorized by the FAA through LAANC, insure it and, once the flight is active, identify real-time local air traffic. I’m not just talking about seeing where other drone pilots are flying, I am talking about manned aircraft. DroneInsurance.com offers per-craft insurance with various liability and duration starting at around $25/day, around $300/year and up from there.

Integration with the insurance platform makes life easy for you. The first time through you need to share your information, answer a few questions to set up your profile, but from there on AirMap will feed over your info and your drone info so that you are just a few taps from flying with insurance. What you see in the app is only a fraction of what AirMap is capable of. In fact, they are building a platform, now with multiple SDKs for third-party expansion, that can handle a vast majority of any flight operation. A single pilot running a single drone? No problem. A station commander with multiple pilots and multiple craft flying simultaneously? AirMap does not provide the software for that level of operation, but a dev could easily build such an application, using AirMap as the backbone of the project.

Joining the DroneCode community, AirMap is giving access to even more of their systems, specifically working with the QGroundControl base station to allow pre-flight and operational mapping and control of the craft. LAANC is still new and impressively implemented through AirMap. We applied for several airspace authorizations in controlled airspace during our visit, they were approved in a matter of moments. I mean ‘moments’ in a rapid sense. I believe the fastest was under 15 seconds, the longest took still less than 1 minute. Remember the days of needing weeks to get clearance to fly? Most of the country can forget about that hassle now. It’s still a bit of a timely process to get waivers, but airspace authorization is as close to instant as most of us should ever need, and as easy to get through AirMap as can be imagined.

Best of all, AirMap is committed to learning and growing with us. With you, the pilot. They take feedback seriously and look to grow their offerings based on our needs. I shared some of my opinions and desires, I urge you to do the same, just look for the feedback button in the app.

When I say that AirMap is looking to grow with us, I’m not just talking about the United States, I mean almost the entire world. AirMap pulls maps, airspace info and aircraft tracking data from dozens of sources spanning the majority of the globe. If you can buy a drone in your country, there’s a good chance AirMap can help you fly it safely. If it sounds like I am impressed, there’s a reason for it.

Now that we’ve discussed some of the basics of the front-end of AirMap, I can only point you in the direction of all of the back-end developer tools and integration options available. Better yet, here is a short lost of some of the top companies that have used AirMap in one manner or another in their products. You may not have realized you were even using AirMaps this whole time: We hope to learn more about AirMap as we go. Stay tuned for some how-to material as we show you how to use the app for hobby pilots, for commercial pilots and more. We also plan to explore the DroneCode open source community, in which we are sure to learn even more about AirMap.

At the end of InterDrone, our main takeaway is that AirMap is dialed in on ensuring pilots like you are able to fly safe. Compliance and understanding of the laws, plus now providing insurance, is the immediate goal, but through these steps each and every one of us should be able to perform safer flights, putting drones into the air in a transparent manner, all without the hassle of paperwork.

Have you used AirMap to receive airspace authorization through LAANC? Were you as impressed as I was?